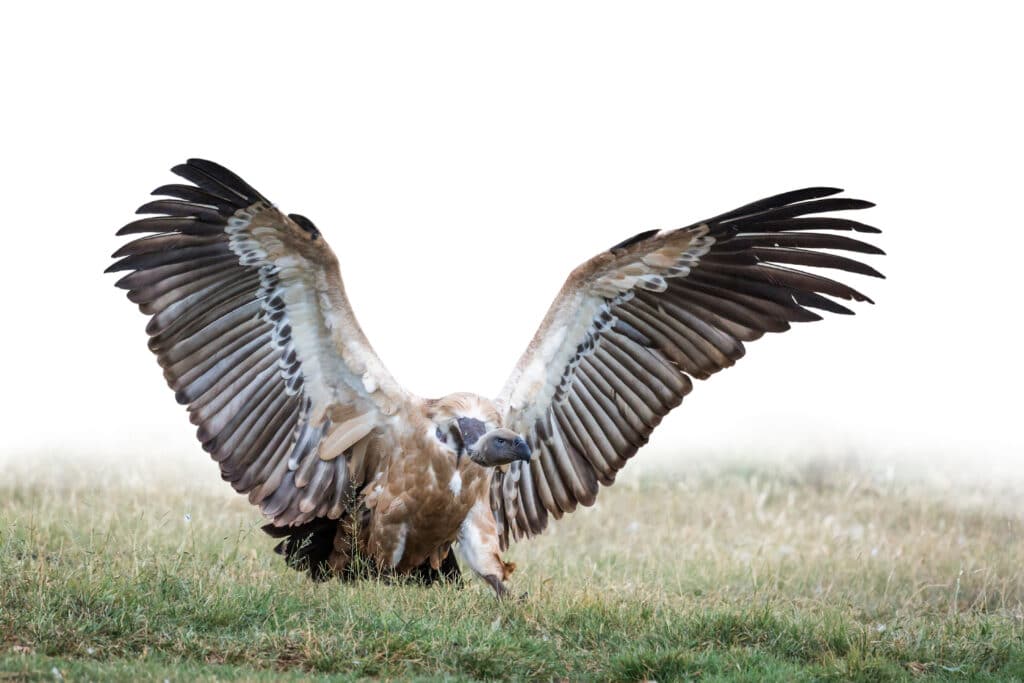 Several vultures soar high over the African sky, using their giant wings to effortlessly ride thermals over vast distances, eyes firmly fixed to the ground, scouring the landscape in search of their next meal. These extraordinary birds have long fascinated humans, from symbolising the circle of life amongst Ancient Egyptians to more recent depictions as harbingers of death – a misleading trope, given that through scavenging, vultures provide an important ecosystem service, quickly limiting disease transmission at decomposing carcasses.

Unfortunately, Old-World Vultures (the 16 vulture species that occur across Africa and Eurasia) are also one of the world’s most threatened bird groups. Sharp declines were first recorded in the 1990’s, where the use of Diclofenac – a veterinary drug toxic to vultures – resulted in some of Asia’s vulture populations declining by up to 99.9%, some of the most rapid declines ever recorded in the avian world. BirdLife soon discovered that African vulture populations were unfortunately mirroring these declines, and in 2015 six of Africa’s 11 vulture species were uplisted to a higher extinction risk category.

Thousands of years of evolutionary fine-tuning have made vultures highly skilled scavengers, so hundreds of vultures often descend on a single carcass. Unfortunately, their impressive ability to locate their next meal also means that a single poisoned carcass can kill multiple birds, and poisoning is the main reason for the group’s catastrophic declines.

Vultures are poisoned for multiple reasons, sometimes intentionally, such as in southern Africa, so that the dozens of circling birds doesn’t alert law enforcement to the presence of poachers. They are also often the unintended victims of poisoning, such as when farmers leave poisoned carcasses to kill large predators in retaliation for killing their livestock. In certain regions, threats such as belief-based use of vulture body parts and collisions with energy infrastructure have also contributed to these sharp declines. Fortunately, BirdLife has been working hard across the world to try and turn the tide for these iconic birds of prey.

Communities at the forefront of conservation

Involving local communities is at the heart of BirdLife’s efforts to halt the unprecedented declines of vultures. In southern Africa, BirdLife Partners have trained and formed multiple Vulture Support Groups (VSGs), which are self-governing teams of volunteers that champion vulture conservation amongst their communities, monitor vulture populations and rapidly report and respond to any poisoning incidents.

The first VSGs were formed in western Zimbabwe in 2020, where every two weeks the teams go out and monitor all known vulture nests in the area, which at times requires navigating over 10km of dense African savannah. Beyond raising awareness of the importance of vultures and providing regular updates to BirdLife Zimbabwe, these VSGs also identified several new nests, a critical step towards their protection. Following this success, VSG’s have since been formed by BirdLife Partners in neighbouring Botswana and Zambia.

Similarly in East Africa, Nature Kenya (BirdLife Partner) has trained Vulture Volunteers across the country’s rangelands, that are home to eight vulture species, four of which are Critically Endangered. Along with educating communities about the importance of vultures, these volunteers act as first respondents when poisoning cases are reported – and acting quickly is vital to limiting the number of birds visiting a poisoned carcass. For example, the rapid response of volunteers to a poisoned hyena carcass in 2019 helped save an estimated 100 vultures, and since then, Vulture Volunteers have helped halve the number of poisoning incidents in the Maasai Mara. “Our ability to be nimble and react to local emerging issues through our widespread network and national Partners can be the difference between a live vulture or a dead one!” says Salisha Chandra, BirdLife’s Culture Conservation Coordinator for Africa.

Havens for these iconic birds of prey

As with all species, vultures need a safe home, free from threats. However, as vultures travel vast distances in search of food food – some African species have home ranges over 340,000 km2 – protecting large enough areas is no easy feat. Vulture Safe Zones (VSZ’s) are areas where concerted efforts are taken to remove the threats vultures face, allowing them to safely forage across poison-free landscapes,. To protect large enough areas, this requires working with a wide-range of communities and farm owners to make sure their lands are vulture-friendly. VSZ’s have been critical in the recent stabilisation of several Asian vulture populations and the concept has since been adapted to address African vulture declines.

In 2017, Birdwatch Zambia (BirdLife Partner) created the continent’s first VSZ and since then, over a million hectares of VSZ’s have been established across southern Africa. By creating a safe space for vultures by reducing and mitigating myriad threats, these areas also conserve habitat for an array of other species. Farmers also benefit: “Since we have become a VSZ, we no longer have to deal with the after-birth of our cows. Vultures do it for us!” says a dairy farm owner in Zambia. Excitingly, in April this year, BirdLife South Africa partnered with Peace Parks to establish Africa’s largest VSZ to date in Zinave National Park, Mozambique. This VSZ is part of a cross-border conservation area that will provide a haven to Critically Endangered species such as White-backed and White-headed Vultures.

The demand for vulture parts for belief-based traditions is another major threat to many African vulture species, particularly in West Africa. Here, the use of vulture parts and eggs for various traditional charms and medicines is the leading driver of vulture declines and the scale of the issue is staggering. For example, in Guinea Bissau, over 2000 Critically Endangered Hooded Vultures were killed in 2020 alone, most of these deaths linked to belief-based use.

In the last few years, BirdLife has worked extensively in the region to tackle the issue, focussing on finding out what is driving this use, improving law enforcement where it is already illegal and shifting behaviours away from using vulture parts.  For example, since 2019 Nigeria Conservation Foundation (NCF, BirdLife Partner) has worked with over 80 traditional healers to help shift them towards using plant-based alternatives. Although still in its infancy, the project is already showing results, and less than half of traditional healers in Nigeria now use vulture parts – a drop from over 95% in 2019. “Once I understood the important role of vulures, I wanted to raise awareness of this,” says Ogunwole Gbenga, a traditional healer now involved with NCF as a ranger. “Since getting involved, it has been very rewarding to see a significant reduction in the hunting of vultures”.

BirdLife has also contributed to efforts to protect Asia’s vulture species, being a leading participant to the Save Asia’s Vultures Programme (SAVE). One of the innovative ideas that has proved successful in Asia is to provide these iconic species with their own ‘fine-dining’ experience.

Cows are sacred in Hindu culture, so it’s illegal to kill them in countries such as Nepal. To help farmers deal with ageing, unproductive livestock, Bird Conservation Nepal (BCN, BirdLife Nepal) has helped establish shelters to care for older cows. Once they die a peaceful, natural death, BCN leave their carcasses at designated ‘Vulture Restaurants’ for vultures to feed on. The world’s first community-run Vulture Restaurant was established by BCN in 2007 in Kawasoti, within the Buffer Zone of Chitwan National Park, and is frequently visited by an increasing number of vultures including Critically Endangered White-rumped and Slender-billed Vultures.

Beyond providing a tasty, poison-free meal to these threatened birds, these restaurants are also benefiting the wider community. Tourists and nature lovers flock to see these sadly now-elusive species, while community members are also trained and employed to monitor the species’ population. Following the success of Kawasoti, six more community-run Vulture Restaurants have been established in Nepal. “After all our efforts to engage local communities seeing the numbers of vultures increase and communities benefitting is a big achievement for us,” says Ishana Thapa, Chief Executive Officer at BCN.

7 of the 11 African Vulture species are threatened with extinction

Perhaps the vulture most enshrined in human culture is the Egyptian Vulture, which, as its name suggests, is deep-rooted in Ancient Egyptian mythology. Considered sacred amongst ancient pharaohs, the species was used to depict the Egyptian goddess Nehkbet and its silhouette was immortalised as an Egyptian hieroglyphic alphabet. Beyond this ancient mysticism, the species has several unique characteristics of its own, being one of the few birds to use tools – picking up stones to crack open eggshells, including those as large as Ostrich eggs.

It is also one of the few vultures to undertake long-distance migrations, breeding across Europe before journeying beyond the Sahara Desert to winter – for some birds, this means a journey of over 6000 km, spanning three continents, to circumnavigate the Mediterranean Sea. Unfortunately, Egyptian Vultures face a myriad of different threats throughout these epic journeys, and it is now on the brink of extinction. As with many migratory birds, international cooperation is therefore vital to their protection and in 2017, to prove conservation knows no borders, 22 organisations spanning 14 countries (including 13 BirdLife Partners) formed the Egyptian Vulture New LIFE Project. By addressing threats throughout the species’ migratory route, the project is helping to bolster the species’ eastern European breeding population, which has declined by a staggering 80% over the last 30-years.

Excitingly, just this month a record number of vultures were recorded in the annual Balkan pre-migration count, welcome news as the birds begin to set off back to Africa. This follows from previous promising news this year, when a released vulture formed a pair in Eastern Rhodopes, Bulgaria – an area that had been devoid of the species for 20-years – the first ever captive-bred bird to do so. While they did not breed this year, this is an encouraging sign that releasing captive-bred birds may be vital to boosting the prospects of this Endangered species.

Saving the vultures of Saudi Arabia

Vultures are one of the most threatened families of birds in the entire world and their decline has been shockingly rapid. Some species in Africa and the Indian subcontinent have declined by over 95% in the last few decades, a rate faster than even that of the Passenger Pigeon or Dodo.