Protecting Hornbills has Sweet Results for an Indigenous Community in Malaysia 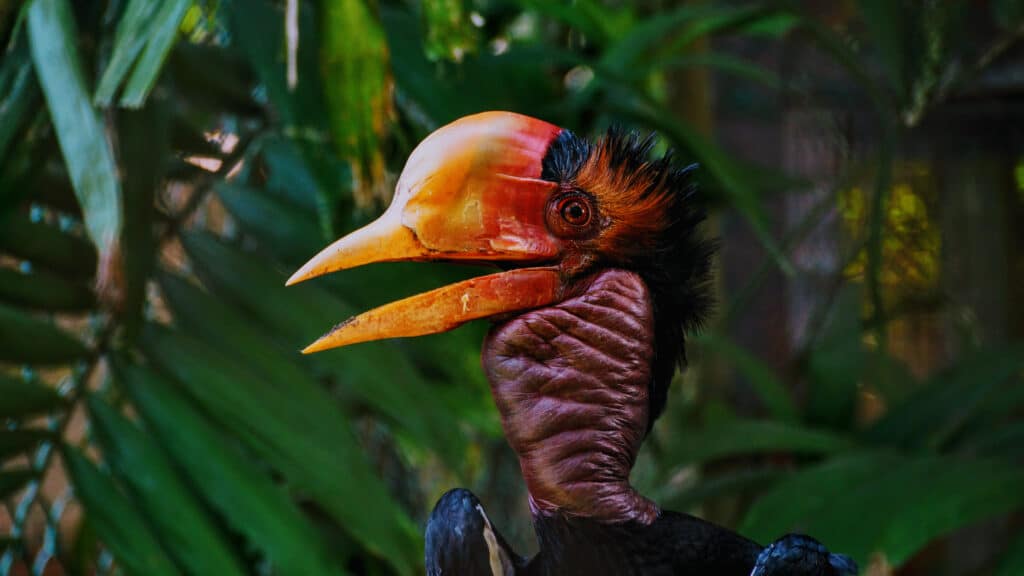 The Orang Asli, an Indigenous community in Malaysia, have received a flavourful reward for protecting Helmeted Hornbills and their forest home, as a healthy forest provides opportunity to collect and sell a special Tualang honey.

Throughout the dense tropical rainforests of Belum-Temenggor Forest Complex (BTFC) in Malaysia, the Malaysian Nature Society’s (MNS) Hornbill Guardian teams patrol the landscape in search of Helmeted Hornbills. The Hornbill Guardians are also members of Malaysia’s Indigenous community called the Orang Asli. Since 2004, they have been working with MNS to protect the Critically Endangered Helmeted Hornbill and other hornbill species through community patrol and monitoring units, along with a more unusual initiative – selling Tualang honey and beeswax. These initiatives have inspired other creative and often flavourful Helmeted Hornbill protection programs from BirdLife Partners around the region.

The Helmeted Hornbill can be found across four countries: Malaysia, Indonesia, Myanmar, Thailand and Brunei Darussalam. The birds use the cavities of large, tall rainforest trees to nest as hornbills cannot excavate nor build their own nests. Their presence in these forests is crucial, as they eat fruit and spread the seeds throughout the rainforest. Unfortunately, what makes these birds unique from other hornbills also makes them more threatened for poaching. Unlike the hollow casques of other hornbills, the Helmeted Hornbill’s casque is mostly solid. Poachers hunt the birds and sell their casques which are then intricately carved and sold for thousands of dollars.

When MNS began work to protect and maintain the Helmeted Hornbill and its forest habitat, they turned to the people living alongside the birds, the Orang Asli. Orang Asli, directly translated as original people, have historically inhabited forest environments around Peninsular Malaysia. While many have moved into towns around the country, the community of Kampung Chuweh still resides in the BTFC.

In conserving Helmeted Hornbills, the MNS sought to ‘marry’ both modern conservation techniques with the Orang Asli’s traditional ecological knowledge of BTFC and the hornbills. Chin-Aik Yeap, the project manager and co-founder of the MNS Hornbill Conservation Project, developed a program to do just that, and called it the Hornbill Guardians. Six Orang Asli were hired to hike through the forested hills and take boats around the jade-coloured river valleys, searching for and monitoring the Helmeted Hornbills and the 9 other hornbill species in the area. When the Hornbill Guardians came across a nest, they took turns to watch over the tree and nest until the chicks hatched. To date, the MNS Hornbill Conservation Project has recorded over 100 hornbill nests in BTFC comprising of 9 species.

When not working as Hornbill Guardians, a few members of the team work with other members of their community by scaling the Helmeted Hornbill’s favourite tree, the Tualang tree Kompassia excelsa. This tree also happens to be popular with Asian Giant Honeybees Apis dorsata that produce a rather special Tualang honey. Between March and July every year, groups from Kampung Chuweh climb up to 50 meters high in these massive trees to collect this honey. Despite the incredible risk, the payoff for the community is very valuable, and many refer to the supplemental income from the honey as a ‘bonus month’.

MNS’s involvement in Tualang honey began when the honey harvesters sought Yeap for assistance in finding a more profitable market for their product. Yeap learned about the community’s honey production and how small their profits were. He promoted the Tualang honey among MNS members in more affluent cities such as Kuala Lumpur, Ipoh and Penang and found support from several individuals. These early buyers formed the foundation for the forest honey and many continue to support the harvesters. All profits from the sales are returned to the harvesters, and the hope is that by building the demand for the honey, the demand for a healthy forest will coincide. Yeap adds that, “it sort of creates a really good story about conserving the forest to remain as intact as possible, as pristine as possible, to benefit the species and also to benefit the Orang Asli that are living in the landscape by being able to harvest the honey and the forest products.”

After having built good relationships with buyers in the cities, Yeap received another request, “one of the buyers of the honey asked us whether we had beeswax”. Up until then, the Chuweh community had normally discarded the wax after squeezing out the honey. When Yeap first asked Kampung Chuweh if they’d like to sell beeswax, there wasn’t a response, but “the year after that, they suddenly gave me 8 kilos of Tualang beeswax, purified beeswax made by 5 makers. So without warning, they produced the product, so we had to follow up and find buyers.” And just like that, the community had another product for sale. In 2021, two MNS members came to the village and taught the women how to add their wax to vibrantly patterned cloth to create beeswrap. These artisan products have now also been sold in affluent parts of Malaysia.

The Hornbill Guardians and the sale of Tualang honey and by-products help with Helmeted Hornbill advocacy in the communities around Belum-Temenggor and in the city. These initiatives also help to build community trust in MNS and protect vital habitat. There is still a threat from poachers “sniffing around” in the area, but with such a strong relationship built on trust, Yeap hopes to ensure that the Orang Asli do not become a conduit for poachers. For now, MNS’s focus is to continue to monitor the hornbill and forests, train the next generation of Hornbill Guardians and at the same time improve the villagers’ livelihood by developing and marketing non-timber forest products such as Tualang honey and beeswax. MNS also hopes to train Kampung Chuweh to eventually manage this enterprise on their own in the future.

In the other countries where Helmeted Hornbills reside, BirdLife Partners have also developed programs to help the species. Some of these programs have taken inspiration from MNS in looking for creative ways to sustain the habitat for the birds.

In Myanmar, the Biodiversity and Nature Conservation Association (BANCA) has also worked with Karen Indigenous communities surrounding Helmeted Hornbill habitat. There, the forested habitats face threats from logging and road construction. “Indigenous peoples in Tanintharyi Region are right on the frontline of the very real and dangerous fight for the Helmeted Hornbill conservation,” mentioned Thiri De We Aung from BANCA. Karen forest law enforcement patrol the forests and protect against poaching, while youth from these communities have participated in training sessions to observe and collect data on the birds in a program that is following in the footsteps of the Hornbill Guardians from MNS.

The Bird Conservation Society of Thailand (BCST) was inspired by the way MNS have utilized non-timber forest products and are working on applying similar methods to another favourite sweet treat in the region. The Klong Saeng district in Surat Thani province in Southern Thailand is already well known for its fruit trees, particularly for a unique type of durian. This Klong Saeng durian is known for having a distinct taste and small size that comes from its environmentally friendly production methods. Khlong Saeng durian farmers still rely on flies, bees and bats for their pollination. These bats also happen to overlap with the habitats of Helmeted Hornbills. The idea is that by promoting the durian production, the habitat for both bats and birds would be protected by those who depend on them.

Previously, BCST’s Helmeted Hornbill work was focused around tourism, but Khwankhao Sinhaseni, the director of BCST, felt that the team needed to see how these birds were impacting the community’s everyday lives. The team asked the people of Khlong Saeng about which non-timber forest products to promote, and the community suggested for BCST to explore durian. While this project is just starting, Khwankhao is very excited about its prospects and the way that their connection to MNS sparked this idea, “when we work with different partners we always learn from each other and I think this is the thing that BirdLife is about”.

In Southern Sumatra in Indonesia, Hutan Harapan is home to several highly endangered species including the Helmeted Hornbills. This rainforest area also contains indigenous communities including the Batin Sembilan that utilize non-timber forest products with the support of Hutan Harapan Management. The biodiversity coordinator for Hutan Harapan, Elva Gemita, shared that her team has conducted surveys with local community members to understand their knowledge and perceptions of hornbills. The team is also conducting bioacoustics surveys along a proposed coal road and transitioning to more native dipterocarp tress where the Helmeted Hornbills are found.

We would like to thank the BirdLife Gala Dinners, and Species Champions, Peter Smith, Ernest Kleinwort Charitable Trust, Fondation Segre, March Conservation Fund, National Geographic Society, the Restore Species Partnership and the European Union for their ongoing funding and support of our work with the Helmeted Hornbill. 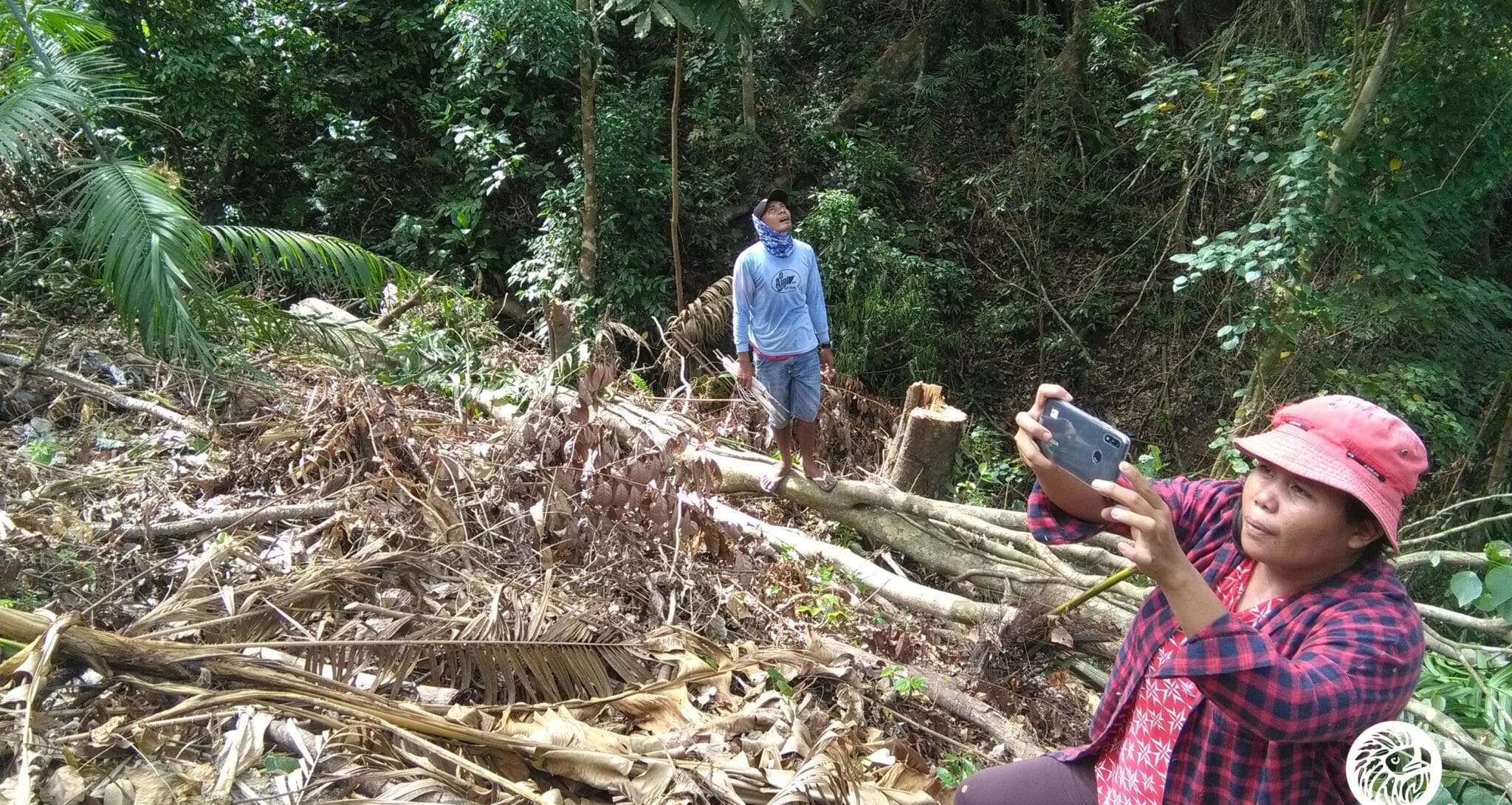 When it comes to protecting forests, community involvement is better than punishment. Thanks to two BirdLife projects, local people in Indonesia and the Philippines are reaping the benefits of managing and protecting their own natural resources.

Eye in the Sky, Eyes on the Ground

How the change in colour of a pixel on a screen can set off a series of events that leads to the empowerment of local communities to conserve their globally important forest.

Read articleEye in the Sky, Eyes on the Ground

Why birds are the answer to saving Malaysian forests

Often dressed in bright colours and with absurdly bulky bills, hornbills are remarkable-looking birds. But their value goes far beyond their aesthetics: they have become the key to saving some of Malaysia’s most precious forests.

Read articleWhy birds are the answer to saving Malaysian forests