What’s black and white and red-listed all over? 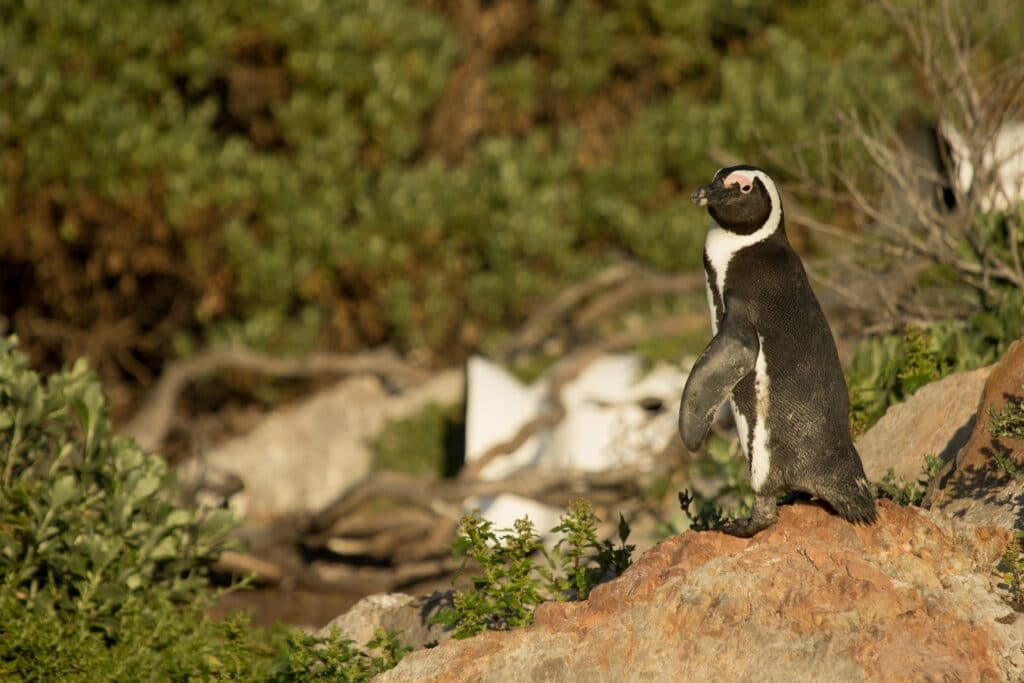 It’s no joke! Penguins are a highly threatened group of birds. On World Penguin Day, we’re celebrating the incredible (and shocking) feats of the world’s best avian swimmers, sharing the work of BirdLife Partners working to protect penguins around the world, and giving you a chance to walk among a penguin colony.

You might not realise it if you see them stumbling around on land, but penguins are highly trained athletes with some impressive feats of performance. Emperor Penguins, for example, have been tracked diving as deep as 500 m (which crushes their lungs to one fortieth of original size!) and as far as 1,600 km on foraging trips that last up to a month, swimming more than 65 km per day. But that’s nothing compared to Adélie Penguins, which are believed to swim up to 5,000 km to return to their spring nesting grounds. Penguins are also one of the most streamlined animals known to science and while diving they consuming oxygen at similar rates to Tour de France cyclists.

Not an embarrassed penguin

The original answer to the joke ‘what’s black and white and red all over?’ may have been ‘an embarrassed penguin’, but it was actually the scientists studying them who were most embarrassed. The secret sex lives of penguins is rather shocking, especially when it comes to Adélie penguins engaging in necrophilia. Research documenting young “hooligan” males mating with dead females has been known to science for over a century – most notably during Captain Scott’s expedition to Antarctica – but our conservative scientific forbearers thought it too risqué to publish widely at the time.

Of the 18 species of penguin in the world, sadly 12 are globally threatened or Near Threatened on the Red List, with 5 of these listed as Endangered.

Given the preference of most penguin species for colder climes (even the Galapagos Penguin – the only penguin found in the northern hemisphere – which relies on the cold Humboldt Current regulating the climate), climate change is clearly a huge pressing threat, with 88% of species affected. Climate-driven reductions in krill abundance have caused Adélie Penguin declines and Emperor Penguins are likely to decline as sea-ice disappears.

A BirdLife-led paper (Dias et al. 2019) showed that threats in the marine environment affect most penguin species, such as overfishing (70% of species), bycatch in fishing gear (65%) and pollution (47%). Indeed, Humboldt Penguins (Vulnerable) have been killed and impacted by the recent disastrous Repsol oil spill off a highly biodiverse part of the Peruvian coast, where they breed and feed.

Terrestrially, 65% of penguin species are disturbed by humans at their colonies, 59% are affected by invasive species such as rats and cats, and habitat degradation is a major problem.

Hoiho (the Māori name for Yellow-eyed Penguins which translates to ‘noise shouter’ due to their shrill call) are one of six penguin species found in New Zealand. They eat mostly bottom-dwelling fish and crustaceans and prefer to find secluded, undisturbed sites, to nest. There are only about 1700 pairs remaining, split between South Island and two sub-Antarctic islands managed by New Zealand. The mainland population is decreasing most rapidly, driven by introduced predators, disease and bycatch in fisheries.

Forest & Bird (BirdLife in New Zealand) has recently launched an appeal for help for their work to save Hoiho. This includes at the coastal reserve at Te Rere, where they have been working for 40 years. A recent article details the highs and lows of their work to protect this penguin sanctuary from habitat destruction, plus their habitat restoration work, invasive species control and personal dedication.

Last week, the inshore waters of the Falkland Islands (Malvinas) were confirmed as Key Biodiversity Areas (KBAs) due to their importance for nine local breeding seabird species, including Gentoo Penguin and Southern Rockhopper Penguin (Vulnerable). Thanks to the hard work of Falklands Conservation (BirdLife Partner), the islands’ natural assets are demonstrated on the global stage and can help further underpin eco-tourism development and sustainable marine management.

“With these new designations, combined with last year’s KBA designation for the Sei Whale [the first such achievement in the world for Sei Whales], the Falkland Islands has an opportunity to be at the forefront of marine management practices”, says Emma Harte, Marine Conservation Officer at Falklands Conservation.

Check out our Virtual Reality film , which was filmed at penguin colonies in the Falkland Islands (Malvinas)!

African Penguins (Endangered) breed only in South Africa and Namibia and their population has decreased by over 60% in the last 30 years, mainly due to a lack of food caused by shifts in prey distribution and competition with the fishing industry, and if trends continue, they could disappear from South Africa’s west coast completely. In a world-first project, BirdLife South Africa is attempting to establish an African Penguin breeding colony in the De Hoop Nature Reserve, which uses decoy penguin models to attract real penguins along the coast where they’re closer to better waters for feeding.

BirdLife South Africa and partners are also working on a number of other fronts to address the dire situation of the African Penguin. “We are pushing for the implementation of an Ecosystem Approach to Fisheries Management by advocating for fishing closures around breeding colonies, investigating the non-breeding distribution of adults, and working to change the way fishing quotas are set to better take into account the needs of penguins and the ecosystem”, says Christina Hagen, Pamela Isdell Fellow of Penguin Conservation at BirdLife South Africa. “We are also developing a less intrusive form of monitoring at colonies to reduce disturbance and provide near real-time information which can be used by managers.”

While BirdLife Partners are working in the Americas, Africa and Pacific to protect penguins, we don’t have a physical Partner in the final continent where penguins are (most famously) found. But since explorers first set eyes on Antarctica over 200 years ago, human activity has been impacting its wildlife. A BirdLife-led study in 2021 pinpointed some of the most important sites for penguins in Antarctic waters, adding weight behind the proposal to instate a network of Marine Protected Areas there.

“BirdLife continues to support ongoing discussions about implementing a network of Marine Protected Areas [MPAs] around Antarctica,” says Jonathan Handley, Marine IBA/KBA Officer at BirdLife. “Based on the recently identified IBAs, our data support that if the proposed MPA network would be implemented, many more globally important sites for penguins in Antarctic waters would benefit from enhanced conservation measures.”

Would you like to support our penguin conservation work? Please go to: