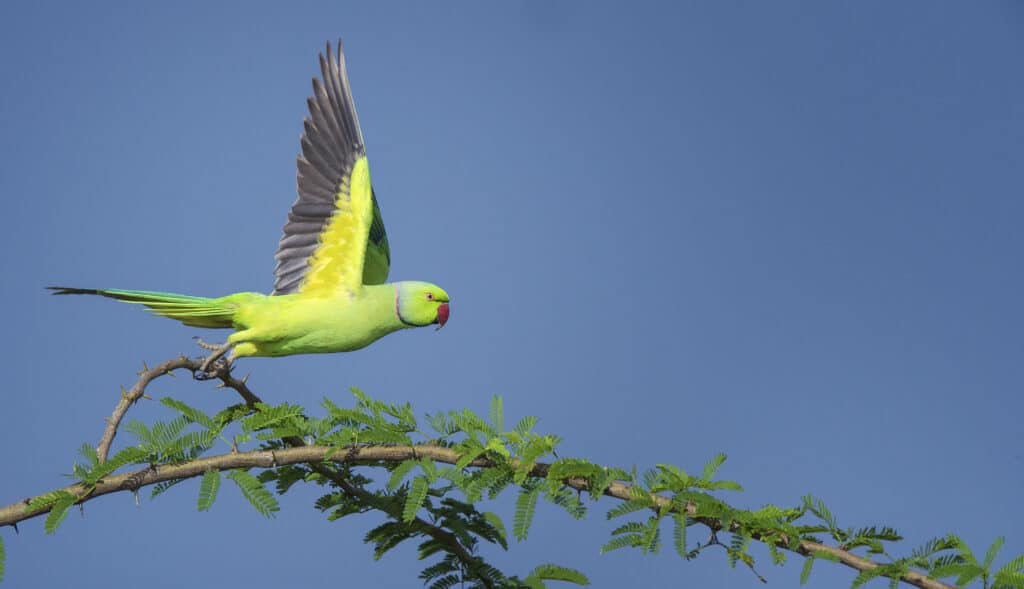 Colourful friends or invasive foes? Dominic Mitchell peers between the pages of the first book to fully explore the biology of non-native parrots and their interactions with native ecosystems.

It’s fitting that an image of Rose-ringed Parakeet appears on the cover of this new book, which is subtitled Distribution, Ecology, and Impacts of the World’s Most Colorful Colonizers. No other member of the parrot family is so widely distributed or has had as much impact as this Old World psittacid, which is now found in more than 35 countries across five continents.

Its successful spread following accidental or deliberate introduction earns Rose-ringed Parakeet a chapter of its own, and in this we learn that the availability of climatic niches, genetic diversity (all four subspecies have contributed to naturalised populations), and phenological and behavioural flexibility are among the keys to its proliferation. With that success come impacts as diverse as competition with native bird species and bats for nest cavities, damage to crops and noise pollution. In Europe, where the non-native population numbers at least 85,000, it is considered one of the continent’s top 100 ‘worst alien species’.

Rose-ringed Parakeet may be the best-known example, but no fewer than 75 of the world’s 350-plus parrot species now have established breeding populations in countries where they were introduced, and in total some 300 species have been transported to other countries through the caged bird trade.

This comprehensive work brings together a wealth of research related to this fascinating field, divided into two sections. Part 1, on background and ecology, includes an overview of the world parrot trade, the distribution of naturalised populations – with USA, Mexico, Europe, Kenya, China, Indonesia and Australia all looming large on the world map – ecological impacts, and the question as to whether naturalised parrots are priority invasive species.

Part II brings together a range of case studies, including of the originally South American Monk Parakeet, now established in 27 countries on five continents, as well as Rose-ringed Parakeet, but also focuses geographically on introduced and naturalised psittacids in the contiguous United States, Hawaii, Europe, Spain and Portugal, South Africa and Australia.

The closing chapter on the future of naturalised parrots, by the book’s editor, includes an interesting comparison of the US ranges of the extinct but once abundant Carolina Parakeet and the invasive Monk Parakeet, and also the contrasting views of naturalised parrot species between the more “tolerant” and welcoming general public and “concerned” land managers, policy makers and biologists. Only time will tell which view will prevail but, despite some control measures outlined earlier in the book, Pruett-Jones concludes that “the future of the world is likely one with many naturalized species of parrots.”

Above: The Rose-ringed Parakeet is the world’s most widespread parrots. Photo © Bjorn Olesen

Enfolded into culture: the symbolism of cranes in Japanese art

From art and origami to conserving the real thing, cranes have always had a place at the heart of Japanese culture. John Fanshawe explores the many ways this iconic bird has offered inspiration and hope.

Read articleEnfolded into culture: the symbolism of cranes in Japanese art