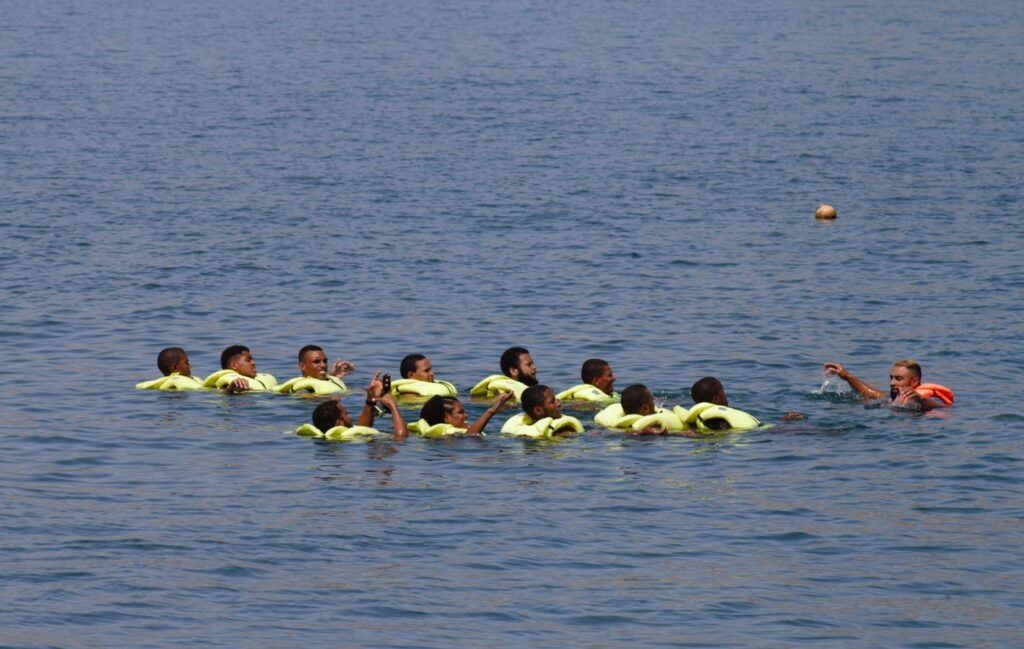 In June 2022, the Mindelo School of the Sea in Cape Verde, initiated the training of a group of 14 people, women and men, mostly young university students, as part of a fisheries observer’s program that the country is just launching. With this training, the government of Cape Verde and its Ministry of the Sea have undertaken an important step towards the sustainable management of its marine resources.

The Cape Verde archipelago is rich in marine biodiversity which includes a wide variety of fish, seabirds, sea turtles, elasmobranchs, and marine mammals. Its various islands and islets offer exceptional conditions for many species of migratory and sedentary birds that breed there. Its ornithological diversity includes emblematic endemic species such as the Cape Verde Shearwater (Calonectris edwardsii), Cape Verde Petrel (Pterodroma feae), Cape Verde Storm-petrel (Hydrobates jabejabe) whose survival is closely linked to the conservation of this environment.

At sea, these animals interact with various fishing gears leading to increased mortality and population reductions. The distribution of these species, especially seabirds, in the country over- laps with large numbers of semi-industrial and artisanal fishing vessels as well as national and international industrial fishing fleets. The fishing vessels use a variety of gears including longlines, purse seines and gillnets, which accidentally catch sea turtles and seabirds, otherwise known as bycatch.

Within the framework of the MAVA Foundation funded project Minimizing bycatch of seabirds and sea turtles in West African industrial fisheries, BirdLife International and its partners carried out an intense advocacy campaign over five years that have led to today’s success. The creation of the Cape Verde fisheries observer program is an important step in addressing the management of marine resources in the country.

As the global community is calling for greater transparency in fisheries management, the Cape Verde government is showing leadership by moving to establish a fisheries observer’s program that will help manage marine resources more sustainably by reporting fish catch, fishing effort and the adverse effects of fishing according to standardized protocols.

“By establishing this program, the government of Cape Verde has honored its commitments to its citizens, on the one hand, and to the international community, on the other”, noted Ahmed Diame, Bycatch Project Manager at BirdLife International.

For the Government of Cape Verde, this is a big step toward the sustainable exploitation of the country’s marine resources. “This programme is vital for the country. An on-board observer can see which species are being caught, check if the fishing gear is being used correctly, and collect catch information, and confirm If the fishing activity is being carried out in a sustainable way and with selective fishing gear”, explained Alberto Martins, Director of Fisheries and Aquaculture at the Ministry of the Sea of Cabo Verde.

“Participants selected to join the fisheries observers programme had scientific backgrounds and were motivated to make a positive impact for the country’’, explained Alciany Nascimento Da Luz, Biologist at the Institute of the Sea of Cape Verde, and national focal point of the Bycatch project.

At the end of their training, these observers will onboard industrial vessels with the mission of collecting data on fishing activities. This systematic collection of data on the impacts of fishing activities on marine megafauna will be a key part of their work, and also a first in the country!

Aluizio Augusto dos Santos Gomes is one of the newly recruited observers. After his studies in marine machinery engineering at the university of Cape Verde and one year of professional experience at CV Interilhas, a Cape Verdean shipping company, he joined the program. “The curiosity to learn more about our biodiversity, and to increase my knowledge about other related areas is what drove me to join the program”, he noted.

For a decade, BirdLife International and its partners have undertaken various conservation actions in the country including scientific research, that is helping to better understand the scale of the interactions between fishing activities and the marine megafauna.

“We have no doubt that the newly established observer program in the country will contribute a lot to the understanding of the impacts of fishing activities on vulnerable species such as seabirds and sea turtles, to then apply advocate for implementing the appropriate mitigation measures for the benefit of all, communities and nature”, concludes Diame.