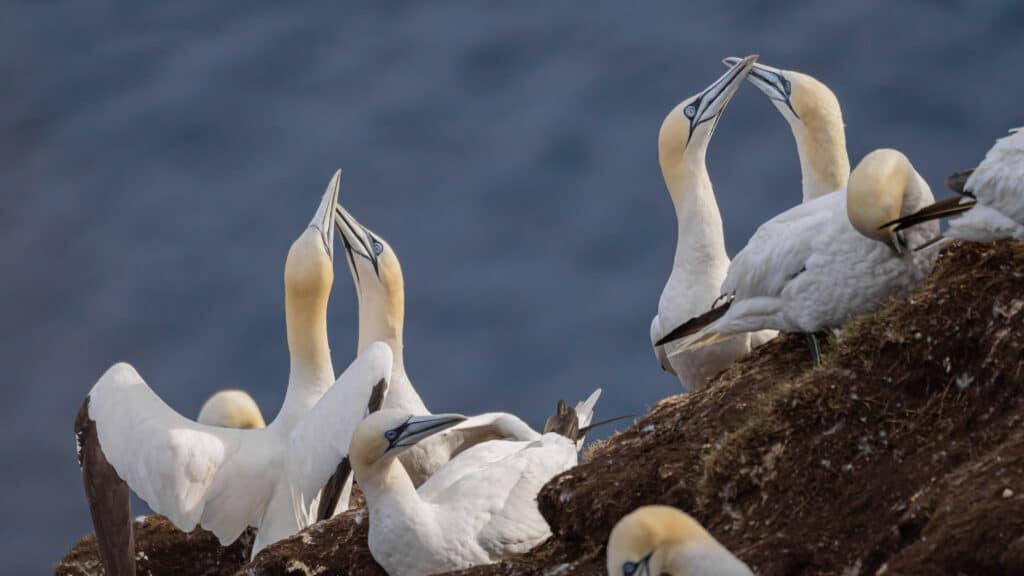 A new, highly pathogenic form of avian flu has been sweeping through wild bird populations across the Northern hemisphere. The unprecedented levels of mortality seen in some species of seabirds have left conservationists extremely concerned about the disease’s long-term impacts.

As we emerge from the most devastating impacts of the COVID-19 pandemic, another pandemic has been wreaking havoc on wild bird populations throughout the northern hemisphere. A new, deadly and highly pathogenic form of avian influenza (bird flu) is rapidly circulating across a wide range of species, devastating populations and leaving conservationists significantly concerned about its long-term ramifications. Over 400,000 dead non-poultry birds (which includes wild birds) have been recorded over the last year – a vast underestimate given only a fraction of birds are tested – from over 2,600 outbreaks in non-poultry birds, over twice the amount as the previous large waves of avian influenza in 2016-2017 and 2021.

An early sign of the devastation occurred when over 300 Demoiselle Cranes were killed in an outbreak of the disease in India in November 2021, while the virus had also been circulating among seabird populations in Southern Africa. The virus soon spread west – likely carried by wild birds migrating to their wintering grounds. In December, 5,000 Common Cranes in Israel were found to have died from the disease, and outbreaks have since been recorded in nearly every European country, leading to widespread deaths across numerous species, including more than 2,000 Near Threatened Dalmatian Pelicans in Greece. The virus was soon recorded in North America – a continent that only recorded its first case of avian influenza in 2014 – and has since been found in over 50 of the continent’s wild species, from Great Horned Owls and Bald Eagles to Northern Gannets and Black-billed Magpies.

The virus has also been wreaking havoc on the poultry industry. In desperate attempts to control the spread, over 37 million chickens have been culled in the USA alone, with many European countries also culling poultry and domesticated wildfowl in unprecedented numbers.

Header image: Seabirds, such as Northern Gannets, have been particularly impacted © Eleanor Hamilton

The highly pathogenic dominant lineage of avian influenza currently circulating is H5N1. First emerging in 1996 in domestic geese farms in East Asia, the disease spread rapidly across poultry farms. Since then, there have been multiple outbreaks in wild bird populations in Asia – particularly among ducks, geese and swans – which have occasionally spread to Europe when these species migrate. While these outbreaks have had significant localised impacts on populations, they have typically only affected a handful of species before petering out, and in Europe have largely been restricted to the Autumn and Winter months.

However, the latest form of H5N1, which is believed to have emerged in 2014, has several concerning characteristics that suggest the virus is becoming better adapted to infecting wild birds. Most worrying is its seemingly higher transmissibility, resulting in a far higher proportion of wild bird populations becoming infected and unfortunately dying. “High percentages of species’ populations are impacted by the active strain of H5N1”, says Willem Van den Bossche, Senior flyways officer for BirdLife.  “For example, 40 per cent of the south-east European Dalmatian Pelican population and more than 80 per cent of the UK’s Great Skua population have been affected”.

Unlike previous waves in Europe, outbreaks in the last two years have also continued through summer, suggesting Avian flu may now be endemic within the continent’s wild birds. It is also able to infect a much wider range of species than previous forms. “It is extremely worrying that the active strain of H5N1 stays present all year round, in a large number of species and seems to be able to jump quickly from species to species.” Says Van den Bossche. “This change suggests a shift of infection from winter migrants to wild birds that are resident or summer visitors in Europe and the US, including those that breed in colonies.”

One such group are seabirds, which have been particularly impacted during this wave. Their densely packed colonies provide ample opportunity for the virus to spread rapidly, and the numbers of reported dead birds is devastating. The Netherlands lost up to 80% of its breeding population of Sandwich Terns in a couple of weeks, and large-scale outbreaks have been recorded across seabird colonies in the UK, a country home to globally important breeding populations of several species. Across many Scottish islands, multiple mass mortality events of seabird colonies have been reported, including the world’s largest population of Northern Gannets at Bass Rock, where preliminary indications suggest a massive breeding failure and a significant impact on the population. Similar mass mortality events have been recorded in North America, with over 8,000 dead Northern Gannets being washed ashore in Canada.

Birds of prey and scavengers have also been impacted more than in previous waves, likely catching the virus through feeding on infected birds or carcasses. Nearly all of Western Europe’s birds of prey species have been recorded with the virus, and it has again impacted some populations significantly – for instance, 30% of the Netherlands wintering population of Peregrine Falcons was wiped out in the winter of 2016-17. Worryingly, multiple predatory mammal species have also tested positive for the virus, from otters and seals to foxes and martens.

However, unlike previous strains of H5NI, not all infected birds die from the disease, and some species seem to be more severely impacted than others. There have also been some reports of infected birds showing no signs of disease. Researchers are trying to work out the reasons for these differing impacts, as it is likely contributing to the virus’s spread.

“It is extremely worrying that the active strain of H5N1 stays present all year round, in a large number of species and seems to be able to jump quickly from species to species.”

Controlling the virus once it has spreading amongst wild birds is extremely challenging and will require coordinated efforts. Increased monitoring of the disease is crucial and would allow us to understand the full scale of its impacts, as well as where and how it is spreading, allowing conservationists to act effectively. Most countries, however, only test a fraction of dead birds, meaning current figures vastly underestimate the wave’s impact. “BirdLife is urging governments to set up monitoring systems to track avian flu across a wide range of species and sites.” Says Van den Bossche. “More capacity is also needed to remove the corpses of birds dying of avian flu as quickly as possible from the environment, as the virus stays active for days or weeks and this risks the disease spreading to other birds in breeding colonies, or to scavenging species.”

The challenges of reducing the spread amongst wild birds, however, mean most of our tools to stop the virus spreading are ultimately aimed at its source – poultry farms. Reducing the intensity of poultry farms would significantly reduce the spread of disease, as the thousands of birds packed shoulder to shoulder provides the perfect opportunity for flu to sweep through the flocks. Avian flu can spread through bird faeces and feathers as well as human boots and clothes, so strict biosecurity measures are also essential.  In a similar vein, substantially reducing or eliminating the potential for contact between domesticated and wild populations is also important to limit the virus’s spread. This can include bringing domesticated birds indoors, ensuring buildings are properly biosecure, and in the longer-term ensuring farms are located away from areas where large numbers of birds congregate, such as wetlands and other important migratory sites.

Vaccinating poultry is another potential tool to reduce the spread. Although currently banned in the EU and USA, largely due to fears they may contribute to the virus develop further worrying mutations, following this unprecedented wave, some European countries are assessing this option. “Vaccines are currently used in poultry farms in South-East Asia and the pros and cons of their use should be explored urgently, as vaccination could be a last resort to try to stop the spread and save some of the tiny and isolated wild bird populations that may be at risk”, says Van den Bossche.

These species with small, isolated populations, such as several petrel species, are particularly concerning conservationists, as a single avian flu outbreak could result in devastating impacts. As well as measures to counter avian flu directly, the risks it poses to wild birds are exacerbated by the many other threats impacting them, from habitat loss to overexploitation and climate change. “Effectively conserving the most important sites for nature, particularly Key Biodiversity Areas, restoring degraded habitats, mitigating threats and implementing targeted recovery actions are essential responses to the wider biodiversity crisis, as well as delivering indirect benefits to minimise the impacts of avian influenza,” said Dr Stuart Butchart, BirdLife’s Chief Scientist.

Read articleResponse to the bird flu outbreak in Senegal and Mauritania

When an oil freighter ran aground within a few kilometres of Mauritian nature reserves, local conservationists rushed in to rescue three globally threatened lizard species found nowhere else. The reptiles were moved to a captive breeding programme that could provide a vital lifeline.