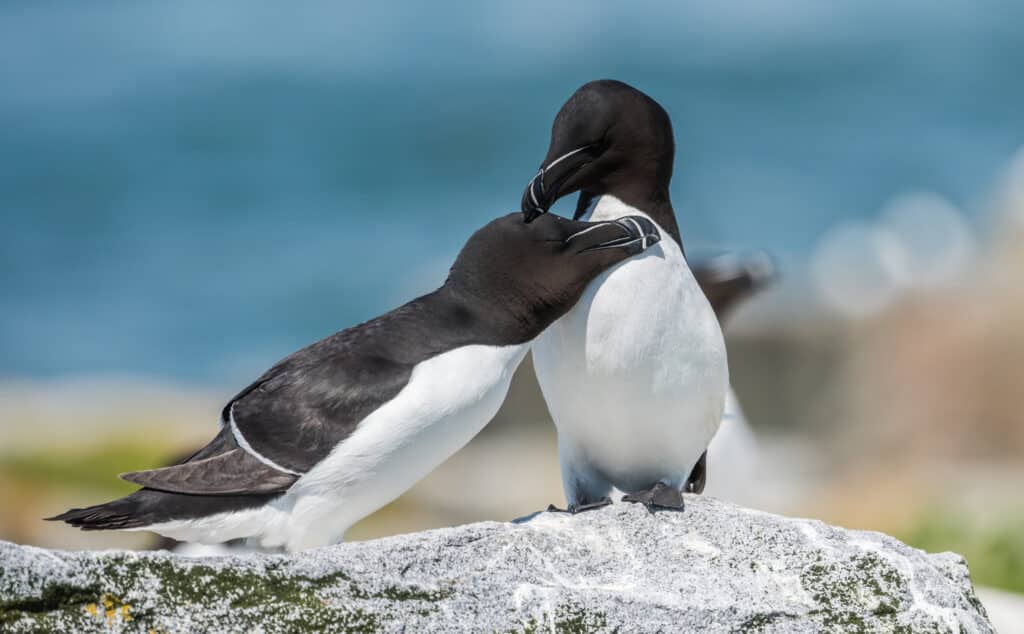 Another month, another seabird...

The European breeding population is estimated at 519,000-1,070,000 mature individuals, which represents approximately 90% of the global population.

Life span: The average lifespan for these birds is 13 years. The oldest Razorbill ever recorded was 41 years old.

Distinct features: These seabirds can be recognised by their blunt, black bill with white lines that extend all the way to the eyes and their yellow palate. Their upper bodies and wings are black, and their underwings and sides are white. Their neck is powerful and long, and they have a pointed tail. When flying, their long tail covers their feet, which are often raised when rafting.

They can dive up to 120 meters deep using their semi-folded wings and streamlined body to propel themselves toward a prey. This technique makes it look like they are flying under water! During a single dive, they can capture and swallow several schooling fish, depending on their size. They usually swallow their prey underwater to avoid being robbed by gulls once they get back to the surface (that’s called klepto-parasitism).

They usually gather in large flocks to feed and spend almost half of their time foraging at sea.

Razorbill nest sites are on open cliff ledges, at least 10 cm away from the edge. They nest in crevices on rocky cliffs or among boulders, and sometimes they even use nests built by puffins or rabbits. These sheltered spaces help protect their young from predators. Remarkably, they do not build their own nests, but instead pile up material, such as pebbles and grass, on top of which they lay their egg.

Razorbills usually start breeding between the age of 3 to 5 years old. These seabirds are monogamous and the mating pairs court several times during breeding periods to strengthen their bond. This includes touching bills and following one another in elaborate flight patterns. From late April to May, the female lays one egg per breeding season, which is incubated by both parents. The Razorbill egg hatches around 35 days later. Razorbill chicks are semi-precocial. This means they are covered with soft feathers and can walk but they cannot thermoregulate properly yet. The young stay under their parents’ wings to keep warm. After 17-23 days the male parent leads the young out of the nest into the sea for the first time.

According to the latest European Red List of Birds, the species has increased significantly across its European range (especially in the UK, Sweden, Ireland and Finland), with Iceland still holding the largest single population in Europe (41%). In Europe, this species breeds primarily in Iceland and the United Kingdom, but also in Sweden and Norway.

They are distributed across sub-arctic and boreal waters of the North Atlantic, ranging from eastern North America to western Europe, where they are found from north-western Russia to northern France.

Birds breeding in Europe winter at sea, with multiple populations aggregating in the North Sea, and some going south, as far as the western Mediterranean.

BirdLife and the Razorbill

Our Icelandic Partner Fuglavernd – BirdLife Iceland (ISPB) – has compiled a page on seabird settlement around the country, as supplementary educational material for all school levels and the general public. It compiles information on 37 seabird settlements around Iceland, including Grímsey island and Látrabjarg cliffs, two important sites for Razorbills. In Iceland, Razorbills are classed as Near Threatened.

Our Portuguese Partner SPEA is actively working on tackling seabird bycatch off the Portuguese coast for many years. Razorbills have been reported as bycatch mainly during the autumn and winter, around the Berlengas’ archipelago. SPEA is now running a fundraising campaign to prevent the death of seabirds in fishing gear. By donating, you can help save thousands of seabirds, including Razorbills.

Razorbills are the closest living relative of the extinct Great Auk (Pinguinis impennis).

Razorbill chicks always fledge in the late evening, after sunset, when they are between 15-25 days old.

In one colony in the USA, male and female Razorbills consistently brought back different species of prey for their chicks, which suggests a degree of specialization between the sexes.

Check out this amazing interview with our American Partner Audubon on the how the climate crises is one of the biggest threats Razorbills face: