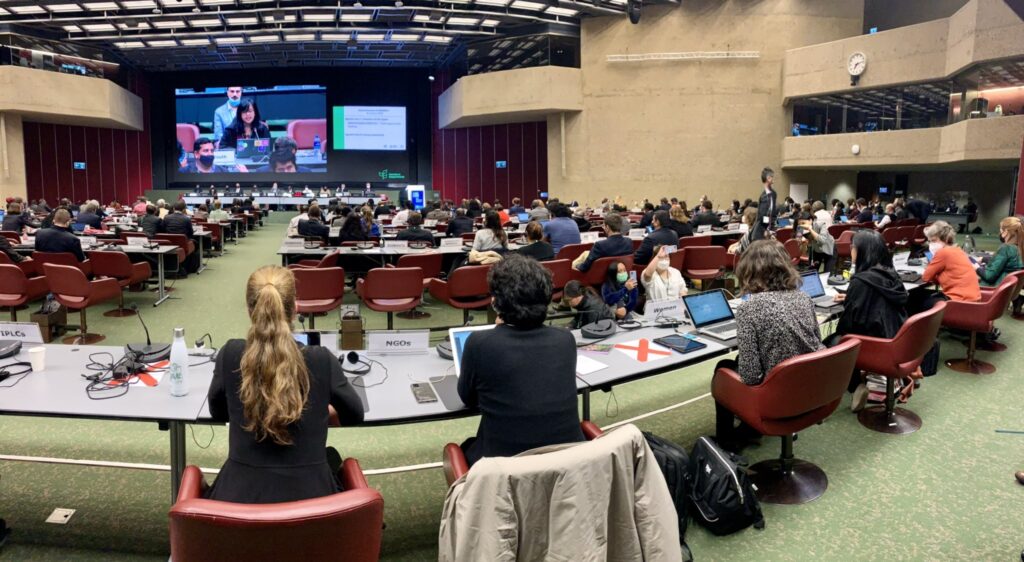 "Humanity and nature are at a tipping point – we must act now”: after many late nights, disappointments, a demonstration calling for greater ambition, pleas, (and lots of brackets), BirdLife’s policy team reacts to the latest UN biodiversity talks and calls for ambition to match the severity of the crisis

Whilst half of social media was talking about the Oscars, government delegates and observer groups including BirdLife were in Geneva, Switzerland, thrashing out text for a global framework which will change the course of life on this planet. After two and a half intense weeks of discussions, the current session of biodiversity negotiations under the UN Convention on Biological Diversity (CBD) has now drawn to a close. The key hope for these critical talks was that UN Parties would make concrete progress towards the agreement of the post-2020 Global Biodiversity Framework (GBF), the roadmap for international actions to urgently redress our failing relationship with nature. A framework which, by halting and reversing biodiversity loss, should put us on a path towards a nature-positive world by 2030.

After slow progress in the opening week and environmental NGOs including BirdLife demonstrating at the talks to demand greater ambition, a lot remains to be done. Much of the GBF’s text is littered with brackets (meaning it remains unresolved) – a sign of divergent views on the focus of goals and targets, the level of ambition required, and the resources needed to deliver on them.  There is a clear gap between the positive leadership demonstrated by Heads of State signalled by commitments such as the Leaders’ Pledge for Nature , and the erosion of the framework’s ambition being played out on the convention floor.  Negotiators need to be provided with a clear political mandate to ensure this ambition is reflected within the GBF.

A youth delegate from the Global Youth Biodiversity Network spoke out, urgently pleading for better progress: “Delegates, we’ve watched as our hopes for biodiversity were slowly trapped between square brackets”. Noelle Kumpel, BirdLife’s Head of Policy, echoed their disappointment: “We ourselves joined with other international NGOs to call for Parties to be courageous, work together and show leadership.” Interviewed on BBC World Service, she reiterated: “It’s time to focus minds and start to negotiate like our lives depend on the outcome – which is, after all, a plan to save the foundation of all life on earth.”

There have been some notable positives. A strong push from civil society, including BirdLife, has seen support for both the term and concept of ‘nature-positive’ (to halt and reverse biodiversity loss) with many Parties getting behind the idea that we need an ambitious, communicable, measurable mission for the framework that resonates beyond the bubble of the environment community. The recognition of the rights and role of Indigenous Peoples and local communities also got a strong hearing, though a lack of debate on the guiding principles for implementation of the framework, alongside some related targets, means there are many issues still to be resolved.

The BirdLife Policy team has worked with BirdLife Partners and beyond to make substantial progress on some other key areas. We brought together Parties and civil society organisations championing the need for strong outcomes for species (halting extinctions, reducing extinction risk and increasing species’ population abundance), and helped ensure the inclusion of the newly-established right to a clean, healthy and sustainable environment within the framework. The team, collaborating with others, has also been very active on the often overlooked (but critically important) discussions on how progress of the GBF is tracked and reported – elements which are finally emerging within the text.

By far the most challenging discussions have been around resource mobilisation (both monetary and on the sharing of expertise), with much of the key debate placed late in the schedule. It is essential that resources from all sources (both public and private) are made available to match the ambition of the framework. There is urgent work to do between developed and developing countries to find agreement and avoid ambition being hobbled by a lack of resourcing, as highlighted by BirdLife and other leading international environment groups before the meeting.

The marine discussions were also fraught. Despite strong opposition from some, Parties have finally agreed to park the whole negotiations on this matter, including the long-debated topic of Ecologically and Biologically Significant Areas (EBSAs). BirdLife led a call from NGOs highlighting that postponing discussions on marine conservation would signal that this critical ecosystem is being neglected, and asking for intersessional work to progress, including on integrating the role of marine ecosystems in the GBF.

The outcomes of these global discussions are only the beginning – we need to focus on turning words into actions, and time is running out.  The BirdLife Partnership will be key players in the translation and implementation of the GBF at the national level, to work together for a nature-positive world by 2030.

So, next stop is Nairobi in June for the newly-announced fourth round of negotiations on the GBF, ahead of a final round of talks at CBD COP15, the biodiversity Conference of the Parties in Kunming, China in late summer – where the deal will be finally signed off.

“We must see the creation and implementation of a global biodiversity framework that defines a generation and secures our planet’s nature for us and future generations”, says Melanie Heath, BirdLife’s Director of Science & Policy. “It is nothing short of a moral obligation. Humanity and nature are at a tipping point – we must act now.”

Header Image: “A youth delegate from the Global Youth Biodiversity Network speaks of disappointment with progress in the talks: ‘Delegates, we’ve watched as our hopes for biodiversity were slowly trapped between square brackets’.”