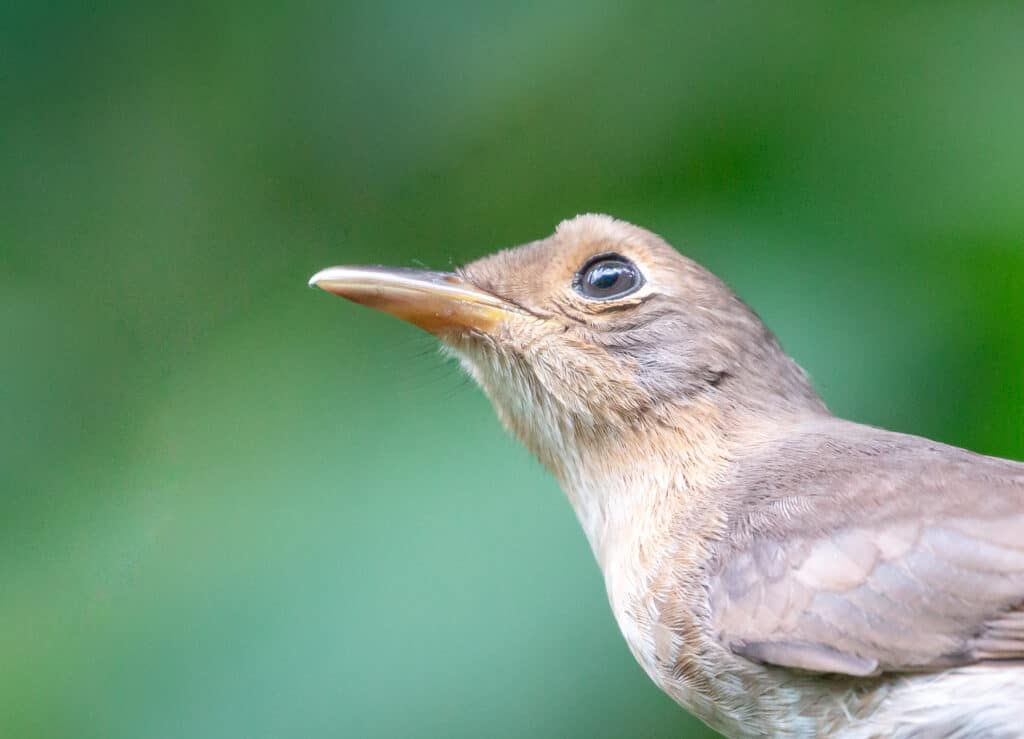 In 1873, a local hunter working for German naturalist A B Meyer on the island of Sangihe, Indonesia, collected an unfamiliar blue songbird that proved to be new to science. Despite further explorations, Cerulean Flycatcher was not definitely seen again until 1998, following which its population was thought to be just 19-135 birds. Almost 25 years later, surveys – including by Burung Indonesia (BirdLife Partner) – have revealed new locations but not increased that initial estimate. Unequivocally one of the rarest of the world’s rare birds, Cerulean Flycatcher is a BirdLife priority.

In 2007, BirdLife launched the Preventing Extinctions Programme (PEP), seeking to understand the status of all bird species and prevent, halt or reverse the slide to extinction. Underpinned by BirdLife science, often supported by funding from Species Champions (dedicated benefactors) and working through local Species Guardians (BirdLife Partners and other frontline conservation organisations), analysis of efforts since 2013 suggests that PEP has helped at least 726 globally threatened species. For Roger Safford, PEP’s Senior Programme Manager, this sends a clear statement that extinctions resulting from human activity “simply aren’t acceptable”.

The ‘rarest of the rare’ comprise extant, Critically Endangered species currently considered to have the tiniest global populations, often just a few dozen individuals. They matter to BirdLife, Safford explains, “because there are no lost causes”. Such species are “typically characteristic of extraordinary places with high levels of endemism and clusters of rare species. Working to save the very rarest birds can bring wider benefits to threatened biodiversity”. So which are the very rarest birds that are benefiting from BirdLife’s help – and how?

Endemic to a single 15-km-long island in French Polynesia, Fatu Hiva Monarch once abounded in a predator-free environment. But this glossy black flycatcher’s population nose-dived during the 1990s after Black Rats scurried ashore from ships and started raiding nests.

Despite protecting nests against rats, the situation deteriorated when it became apparent that feral cats were killing up to half of all fledglings. In 2021, just four breeding pairs remained among a paltry 18 individuals. Grimmer still, the spectre of disease emerged, with Tom Ghestemme from local BirdLife Partner, SOP Manu, confirming that avian malaria was discovered in a dead monarch.

This is truly parlous, but things could have been even worse. Had SOP Manu not started implementing an emergency plan of action in 2016 – seeking to trap rats, neuter cats and safeguard every single nest – Fatu Hiva Monarch would already have joined four of its Polynesian congeners among the ranks of the disappeared. “Without SOP Manu,” Roger states starkly, “this species would almost certainly have gone extinct.”

A rather different denizen of the Pacific region featuring on the ‘very rarest’ list is Chinese Crested Tern. As the new Millennium dawned, some feared this chunky-billed seabird had become extinct. That year, breeding birds were discovered in the Matsu Archipelago off the east coast of mainland China, and BirdLife has since played a key role in the species’ improving fortunes.

Since 2015, BirdLife has helped terns establish a new breeding colony in China and supported the Republic of Korea’s government to safeguard a previously unknown nest site. Burung Indonesia has also confirmed a novel wintering location in Indonesia. Most recently, no fewer than 72 were reported with video evidence in Shandong, China. None of this is sufficient to ‘downlist’ the tern to a lower threat category on the IUCN Red List, but it is undeniably promising.

Of Africa’s rarest birds, Madagascar Pochard was rediscovered in 2006, having been suspected of being extinct. Unfortunately, numbers were eye-wateringly low: just 21 were counted in 2012.

Six years later, after a captive-breeding programme run by a conservation consortium including Asity Madagascar (BirdLife Partner), the Wildfowl and Wetlands Trust, the Durrell Wildlife Conservation Trust and the government of Madagascar, ducks were released at a different wetland.

Within a year, two pairs had bred and, bolstered by further releases, the free-flying population has risen rapidly. “It’s an amazing success story,” Safford observes. “The project has a solid track record, a robust captive population and a good release site. Unless there’s a ‘perfect storm’ of disasters, there’s now no reason for Madagascar Pochard to go extinct.”

An enigma for 120 years until rediscovery in 1998, “it occurs in just two frustratingly small forest fragments almost 100 km apart in a sea of eucalyptus and coffee plantations,” explains Daniel Branch, an ornithologist who helped site wardens in 2021. Although more tanagers may yet be found, “under 20 individuals are currently known”.

Even so, BirdLife is hopeful. In 2017, SAVE Brasil (BirdLife Partner) helped Grupo Águia Branca (a major Brazilian company) create a 1,688-hectare private reserve protecting one key site in Espírito Santo state. Time will tell if the protected forest is large enough and the factors that make this bird so rare even in its habitat can be controlled, so that this exquisite species survives.

Producing an incontrovertible list of the world’s rarest birds is not straightforward. For one, there is a sizeable assemblage of ‘lost’ species – birds unrecorded for decades, even centuries – of unknown status. “None might be left – so the species is extinct – or there may be hidden populations large enough that the species wouldn’t make this particular list,” Safford explains.

Lacking an answer to this fundamental binary question (extant or extinct?) inhibits conservation. Accordingly, last year, BirdLife, American Bird Conservancy (ABC, a BirdLife Partner in the USA) and Re:wild launched ‘The Search for Lost Birds’. This seeks to track down rare species that have eluded detection for between 10 and 156 years.

The concept of extreme rarity is muddled further by five species classified as Extinct in the Wild. Hawaiian Crow, Alagoas Curassow, Spix’s Macaw, Guam Kingfisher and Socorro Dove have vanished from forests yet persist in captivity. Although free-living populations are presently zero, their caged cohort provides the potential for reintroductions. Such a trail has been blazed by California Condor and Guam Rail, both extinct in the wild by 1987 but subsequently reintroduced and now Critically Endangered. Although reintroductions are complex and costly, there are hopes that the quintet might follow suit.

As, perhaps, might Javan Pied Starling. With records since 2000 likely to involve escaped cagebirds, this Critically Endangered Indonesian endemic may already be extinct in the wild. Inspired in part by BirdLife, however, conservationists are capitalising on a bonanza of a million captive starlings by assembling a population for conservation breeding and eventual reintroduction. Should this come good, this striking bird will hopefully never sit on a future list of the world’s rarest.

For several other species, tiny wild populations are outnumbered by captive stocks, providing further conservation options, although the importance of those few wild birds and their habitat cannot be overstated.

Such positivity is justified by past experience. Recent decades provide a panoply of cases where the work of bird conservationists, often BirdLife, has averted extinction. This was made strikingly clear through a 2020 study co-led by BirdLife, which demonstrated that 21-32 avian extinctions have been prevented since 1993. Without conservation interventions, extinction rates would have been three or four times greater.

HOPE FOR THE FUTURE

When the Preventing Extinctions Programme identified the planet’s 15 rarest birds in 2013, it included at least three species that are extant today but are now faring better, thanks to conservation action increasing their numbers. One is Polynesian Ground-dove.

As recently as 2015, the once-widespread species was reduced to a single functional population on the only remaining rat-free island in the Acteon Group (part of the Tuamotu Archipelago). For the ground-dove, “nothing,” Safford says, “was going to improve without removing rats”.

Even longer ago, the list would have looked very different. In 1980, Black Robin was the world’s rarest bird: just five remained. Following intensive management, around 250 exist today; it is now ‘merely’ Endangered. Even more impressively, Nature Seychelles and the Mauritian Wildlife Foundation (BirdLife Partners) have saved sets of endemic birds facing extinction. The populations of several – including Seychelles Magpie Robin (now Endangered), Mauritius Kestrel (Endangered) and Rodrigues Fody (Near Threatened) – had stooped below (some far below) 30 birds. All are now out of critical danger.

There is a distinct echo of 1980s Mauritius and Seychelles on present-day Sangihe. In addition to Cerulean Flycatcher, the island harbours four Critically Endangered endemics, including at least one even rarer than that gorgeous, mysterious blue creature: Sangihe White-eye. Eyes are on the forest-conservation work that Burung Indonesia is doing with local villagers.

Such committed endeavours engender optimism in Roger Safford. “Nothing is beyond saving,” he concludes. “Conservationists including BirdLife have a track record of making a difference to the world’s rarest birds. With further support, we will continue doing so.”

We are forever grateful to the donors and supporters of the Preventing Extinctions Programme, without whom we could not do this vital work. If you would like to learn how to become a Species Champion for one of the species in need by donating at a higher level, email [email protected]