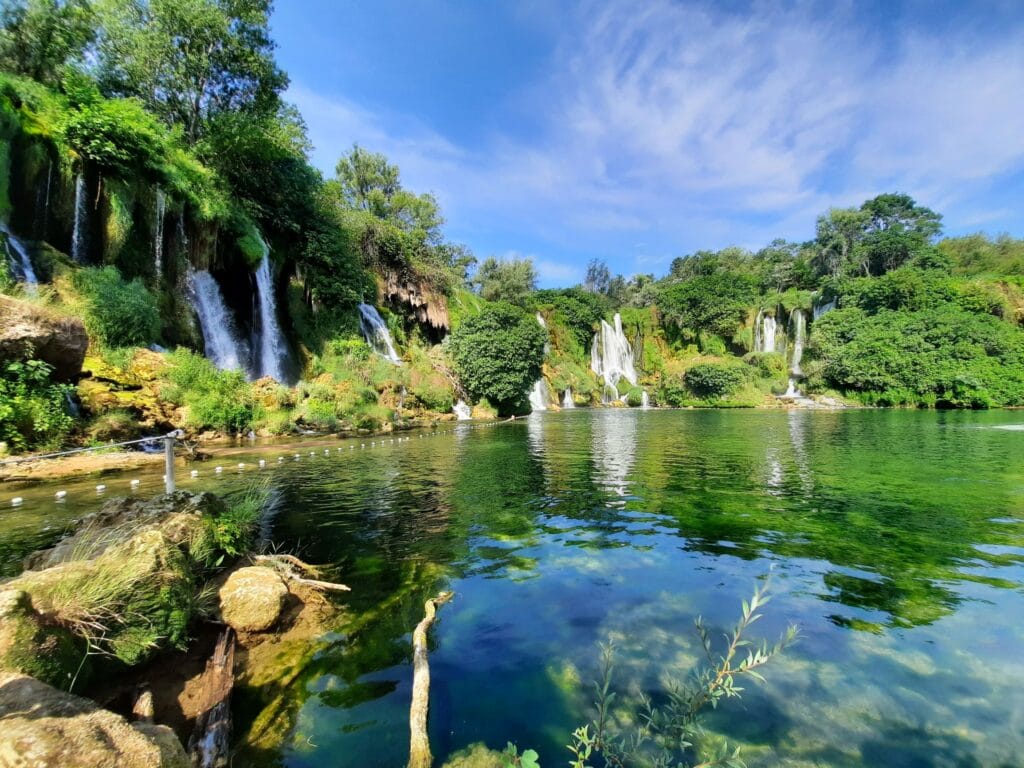 Enter local conservationists from across the region, where thirty-two projects were granted by BirdLife (through its role as Regional Implementation Team for the Mediterranean Hotspot of the Critical Ecosystem Partnership Fund (CEPF)) to support the sustainable management of water catchments – through integrated approaches for the conservation of threatened freshwater biodiversity. And discover how, when it comes to conservation related to freshwater, there’s no better way of working that by engaging local communities.

Sehb El Majnoune is a lake in Morocco that is only wet for parts of the year, and full of surprises. It’s a Key Biodiversity Area, and an important site for migratory birds, but data on the species it supports is dated. The Tensift Region Development Center (CDRT) was awarded a grant by CEPF to assess the conservation status of four Critically Endangered and Endangered freshwater snails present on the site Sehb El Majnoune.

CDRT surveyed the whole freshwater ecosystem, including fauna and flora, and conducted hydrological and hydraulic studies over two seasons. As a result, they managed to find three of the four of the snail species, as well as one of two threatened plant species. During various meetings in which the local community shared their observations, the team was also able to gather useful information about biodiversity and its changes over the years.

The team also surveyed the biodiversity in the artesian wells (springs from which water rises to the surface, which can also be used as an indicator of the water quality) by taking water and soil samples. Here they found something completely new: deep down in a well, at 40 m, they unearthed a new freshwater snail species! CDRT named this species, which has a depigmented body to adapt to the underground environment, after CEPF: Giustia cepfii. Further analysis is being conducted on this new species with scanning electron microscopes to show more detailed anatomical characteristics.

Rocks in the lake are affecting groundwater salinity, so the team provided the local community with a salinity map that will help them in choosing the right place to dig for an artesian well, resulting in reducing the costs and providing good water quality for irrigation, and thus improving their livelihoods. In another win for the community, CDRT rehabilitated ten old artesian wells that were in disrepair and hidden by overgrown plants. This work now prevents sediments and waste from reaching the ground water whilst also preventing children from falling down.

Moreover, various sessions were conducted to raise local awareness about plant species that can adapt to the high salinity in the soil, and on water conservation in agriculture. To strengthen the local community’s relationship with their surrounding environment, CDRT will sub-grant small projects to enhance the livelihoods of the local community, such as ecotourism activities.

The next step will be working hand-in-hand with the local community and municipality to announce a locally managed protected area to conserve Sehb El Majnoune’s rare and endangered freshwater biodiversity.

In between the Tunisian cities of Nefza and Ouechtata, lies Oued Maden. Although this important site has been designated as a Key Biodiversity Area and includes one of Tunisia’s Ramsar sites – Barrage de Sidi El Barrak – there was a lack of information about some of the biodiversity in this spectacular site.

In 2020, when the Covid crisis hit the world, Tunisian Association for Wildlife (ATVS) received a grant from CEPF to improve the knowledge on the freshwater biodiversity of Oued Maden and assess the threats and socio-economic activities that are impacting on freshwater resources. Their extensive experience in the area and their strong relationship with the local community made them a great choice.

Data was collected from the field and previous scientific research, resulting in listing all species found in the site and their status according to the IUCN Red List of threatened species. Moreover, ATVS developed a manual that lists the species in area, which are recommended to be used as a bio-indicators of climate change, soil quality, water quality, etc. The collected data showcase the need to develop a conservation plan for some freshwater species, such as Emys Tortoise and the Common Otter, which are classified as Near Threatened.

The socio-economic aspect of the surveys gave the team a better idea on the linkage between local people and their surrounding ecosystem. Although the Barrage de Sidi El Barrak is one of the most important dams and reservoirs in Tunisia for its use for irrigation, the community considers it a curse instead of a blessing, as it makes it harder for them to reach their relatives, not to mention its impact on their health due to its impact on the humidity. Sharing these results with the local stakeholders opened their eyes to this issue and encouraged them to find a solution.

“Working with CEPF gave us the chance to work on the whole ecosystem, and work with those who have an influence on the ecosystem directly and indirectly.”

Most people in this area live off of the forest’s resources, mostly on cutting mastic trees, as they believe in their right of access and allocation of forest resources. Nevertheless, this practice is illegal. To resolve this conflict, ATVS searched for alternative income resources such as sustainable ecotourism activities, which aligns with the local government’s strategy.

Based on these studies, ATVS created a local Site Support Management Group that consists of representative of local government authorities, civil society, eco-tourism guides, and agri-entrepreneurs. This group will bridge the gap between all stakeholders and support long-term monitoring and local action in favour of biodiversity.

“At the beginning, we focused our work on freshwater species, but at the end we found out that to see a truly impact, you have to work directly with people using the ecosystem and its surrounding areas,” says Sirine Moslah, project coordinator for ATVS. “The key to becoming closer to the local community is by being honest, and not promising them the impossible or raising their expectations too high.”

Wise water management may put an end to water scarcity

Despite the 14 rivers in Lebanon that make it well-known for its tremendous water resources, Lebanon is reaching the threshold of water scarcity, with more than 71% of the population of Lebanon are facing the risk of losing access to safe water. Mismanagement of water resources is one of the main reasons behind the water crisis in Lebanon.

Through different methods and techniques, Difaf surveyed the upper part of the Damour river basin to screen the biodiversity, local community distribution, land uses, and the river environmental flow. Through this survey, Difaf will link the biodiversity and habitat quality to the water quality, aiming at developing a new approach that is based on understanding the importance of the river system.

Samples were taken from the river to assess the water quality in laboratories, and the flora and fauna in and around the river, by using DNA sampling techniques. The primary analysis showcased that the upper part of the Damour River is not that polluted. But discussions with local communities in the area indicated the disappearance of several fish species they used to see in the river.

Linking the traditional knowledge and gathered scientific data will showcase the real value of the river and its effects on the local community’s daily life, ecologically and economically. The next step will be to develop a draft river basin management plan and a charter to be used as a guideline for developing conservation efforts that can further be upscaled to cover the whole river basin in the future.

The Neretva River, one of the largest rivers of the eastern part of the Adriatic basin, is renowned for its biodiversity and landscapes. Nevertheless, the river and its tributaries are under extreme pressure from an increasing population and the associated development pressures including, but not limited to, illegal construction, waste and wastewater mismanagement, and invasive species. To make it even worse, hydropower plants are planned to be built along this river basin.

The Centre for Environment (CZZS) believe that conserving this beautiful landscape and its biodiversity cannot be achieved without joint collaboration among all related stakeholders. To convince stakeholders and integrate them effectively in conservation efforts, more information and statistics were needed. Therefore, and through a CEPF grant, they worked hard to assess the abundance and status of freshwater species in four Neretva Tributaries: Buna, Bunica, Bregava and Trebižat, with a focus on under-researched taxa.

Neretva tributaries in Bosnia and Herzegovina host around 30% of Bosnia’s endemic species. For that reason, CZZS team are surveying the flora and fauna in the area, hand-in-hand with seven young researchers doing their bachelor’s degrees – each working with an expert on a specific taxa. Building the capacity of young generations and giving them opportunities to work in the field can help ensure the sustainability of this rich biodiversity, and CZZS hope that they will carry the burden of conserving biodiversity in the Neretva River basin in the future.

Moreover, the team conducted several meetings with the local community to explain the real concept of protected areas and its benefits on the long term. All local stakeholders, including the local governmental agencies, were invited to these meetings, where for the first time, they had the chance to sit together around one table discussing the future of these important sites and the river basin management. As a result, the relationship between the local community and government was remarkably strengthened.