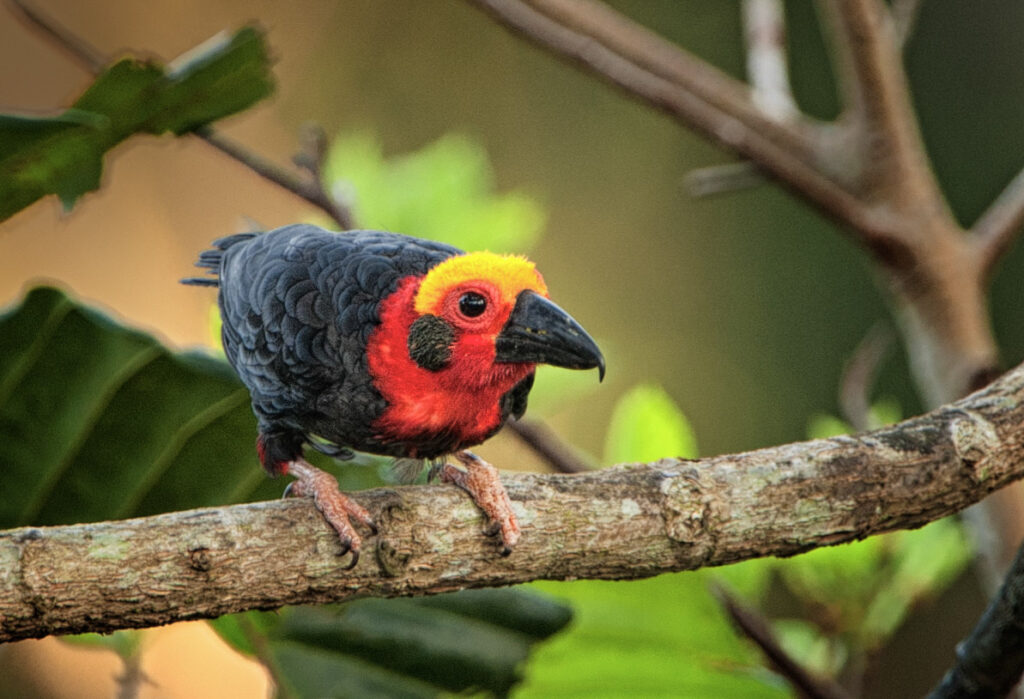 As the official Red List Authority for birds, BirdLife’s Red List team regularly reassesses the conservation status of the world’s 11,000 species, incorporating the latest data to ensure they are categorised correctly and identifying threatened species in greatest need of conservation action. This year’s Red List update comes at a critical time, with the international community currently assembled in Montreal for the Convention on Biological Diversity’s (CBD) COP15, where a new 10-year plan for conserving the natural world is being negotiated.

As highlighted in BirdLife’s recent flagship State of the World’s Birds report, the natural world is currently at crisis point, with nearly half of the world’s bird species in decline and one in eight species threatened with extinction. Unfortunately, the latest Red List update echoes these concerns, underlining the urgency of scaling up conservation efforts.

Tropical forests are magical ecosystems. Filled with a plethora of species, these iconic biomes have long-been the crown jewel for many a nature enthusiast, journeying deep into their reaches to glimpse the millions of species that teem within them. Alongside this, the billions of tonnes of carbon absorbed and stored within their towering trees is critical to mitigating climate change. However, the world’s forests are in trouble. Deforestation, fuelled by our ever-increasing and unsustainable demand for resources, has long been recognised as the greatest threat to them – and indeed one of the gravest risks to biodiversity.

Despite this, it is only with the relatively recent development of modern satellite imagery that the full scale of the impact of deforestation can be quantified. A collaboration with the World Resources Institute, which runs Global Forest Watch, has enabled BirdLife’s Red List team to reassess how much forest loss has occurred within the ranges of thousands of forest-dependent bird species over the last 20 years. Unfortunately, these new data show that in many areas, forest loss has been more rampant than previously feared, and this is reflected in this year’s Red List update, as multiple forest-dependent species have been moved to higher extinction risk categories.

In Asia, the data are particularly bleak for the lowland forests of Sundaland, an area comprising the Thai-Malay Peninsula and the islands of Borneo, Sumatra and Java. Home to some of the world’s oldest rainforests, accelerating forest loss has inevitably resulted in population reductions of many species. Malay Peacock-pheasant and Malay Crestless Fireback have been uplisted to Endangered and Critically Endangered respectively, with the latter thought to have lost nearly 70% of its forest habitat since 2001. Deforestation has also driven several Bornean endemics closer to extinction, with Bornean Crestless Fireback uplisted to Endangered and Bornean Ground-cuckoo to Vulnerable. Perhaps most notable is Bornean Bristlehead – a species so unique that it is the sole member of its family, its bright red and yellow face often adorning the cover of field guides to the renowned biodiversity hotspot – being uplisted from Near Threatened to Vulnerable.

Central America is another region where recent deforestation has been more rapid than previously thought, causing several species to be newly flagged for conservation concern, such as White-throated Shrike-tanager (now Near Threatened). As elsewhere, a combination of forest loss and hunting pressure – which often increases as deforestation causes smaller and more fragmented forest patches to become accessible – has also seen the uplisting of Slaty-breasted Tinamou (to Vulnerable) and Black-eared Wood-quail and Tawny-faced Quail (both to Near Threatened).

Accelerating forest loss is also having an impact in Africa, with Sharpe’s Apalis uplisted to Near Threatened, having lost 22% of the forest habitat within its range in the Upper Guinean forests of West Africa in the last decade alone. Similarly, the closely related Chirinda Apalis of East Africa is now Vulnerable, owing to rapid deforestation along the border of Zimbabwe and Mozambique.

“These changes to the IUCN Red List reflect the urgency of conserving tropical forests and the need to end, and ultimately reverse, deforestation,” says Dr Ian Burfield, Global Science Coordinator (Species) at BirdLife International. “This is a core goal of the BirdLife Partnership, and we are already working extensively across much of the world to end deforestation.”

2022’s Red List update also underlines that climate change can no longer be thought of as a problem for the future, with its impacts already having a devastating effect on many species. This is reflected in this year’s updates in Australia, a country that has experienced numerous droughts, heat waves and fires over the last decade.

In response to warming climates, mountain species are often forced to move to higher elevations to seek the cooler temperatures to which they are adapted. However, there is naturally a limit to how high species can go, and for several birds endemic to the montane tropical rainforests of north-east Australia, this limit is seemingly being reached. With nowhere else to go, climate change is acting as an ‘escalator to extinction’ and has seen the conservation status of multiple species deteriorate.

Fernwren, for example, has shockingly been uplisted by not one but three categories, from Least Concern to Endangered, its population declining by over 50% over the last 15 years. Climate change is the only known threat to the species, and declines have been particularly severe for populations found at lower elevations, which are gradually forced higher as temperatures continue to warm. Worryingly, with temperatures set to keep rising, it is likely that populations found at higher elevations in Queensland’s tropical forests will soon follow suit. While Fernwren is perhaps the most dramatic example of this ‘escalator to extinction’, several other Australian endemics have also been affected, reflected in the deteriorating conservation status of species such as Bower’s Shrike-thrush, Mountain Thornbill and Victoria’s Riflebird (all uplisted from Least Concern to Vulnerable).

Along with warming temperatures, the increasing frequency and severity of wildfires is also taking its toll on Australian birds. The devastating ‘black summer’ bushfires of 2019-2020, which made international news headlines as they swept across 19 million hectares of the country with exceptional intensity, had a particular impact. Thought to have impacted up to 180 million individual birds, these fires alone have contributed to 10 species being moved to higher extinction risk categories. Roughly 30% of the global population of Pilotbird is thought to have been lost, as well as 21% of that of Gang-gang Cockatoo, which was already in decline due to logging of its native habitat – both are now considered Vulnerable. Baudin’s Black-cockatoo, endemic to forests in the far west of the country, is also in trouble. A combination of bushfires and logging have left the old trees it relies on for nesting in short supply, contributing to a staggering 90% population decline over the last few decades – it is now Critically Endangered.

“These concerning cases from Australia highlight the urgency of stepping up our fight against climate change, with the conservation of biodiversity at the heart of these efforts” says Alex Berryman, Red List Officer at BirdLife International.

Hope is not lost

Amidst the bleak outlook of 2022’s Red List update there are some glimmers of hope. The extraordinary recovery story of Black Robin, which has been downlisted from Endangered to Vulnerable, shows that conservation efforts can change the fortunes of species in even the most perilous of positions. Endemic to New Zealand’s remote Chatham Islands, the introduction of invasive mammals – notably rats – had driven the global population of the species to just seven birds by 1976, restricted to a single island with an area of just 0.15 km2.

Conservationists at the New Zealand Wildlife Service stepped in, moving the birds to a larger island nearby, where thousands of trees had been planted to provide habitat. However, within a few years the population dropped to just five birds – only one of which was a fertile female, named ‘Old Blue’. With the species seemingly doomed to the permanent abyss of extinction, conservationists used a pioneering technique of removing eggs from the Robin’s nests after they were laid and placing them in nests of the closely related New Zealand Tomtit, so that the female Robins would then relay and raise another brood, while the Tomtits would ‘foster’ the previous one. Known as cross-fostering, this technique proved wildly successful, and Black Robin populations have since gone from strength to strength.

Now with a stable population of 300 birds across two islands – all of which are descendants of ‘Old Blue’ – the downlisting of Black Robin is a testament to New Zealand’s bird conservationists, who continue to set the standard for preventing species extinctions. This includes another species downlisted this year, South Island Saddleback – following a suite of successful translocations since 1964, when just 36 birds on a single island remained, there are now approximately 5,000 birds on more than 20 islands, and the species has now been reclassified as Least Concern.

“These examples demonstrate that conservation can dramatically change the fortunes of species in the most concerning of situations,” says Dr Stuart Butchart, Chief Scientist at BirdLife International. “However, the continued deterioration in status of so many other species highlights the urgent need for action. COP15 provides a critical opportunity for world leaders to commit to scaling up the protection and restoration of our natural world”.

“These examples demonstrate that conservation can dramatically change the fortunes of species in the most concerning of situations. However, the continued deterioration in status of so many other species highlights the urgent need for action. COP15 provides a critical opportunity for world leaders to commit to scaling up the protection and restoration of our natural world”

Read articleRed List update: parrots of the Americas in peril