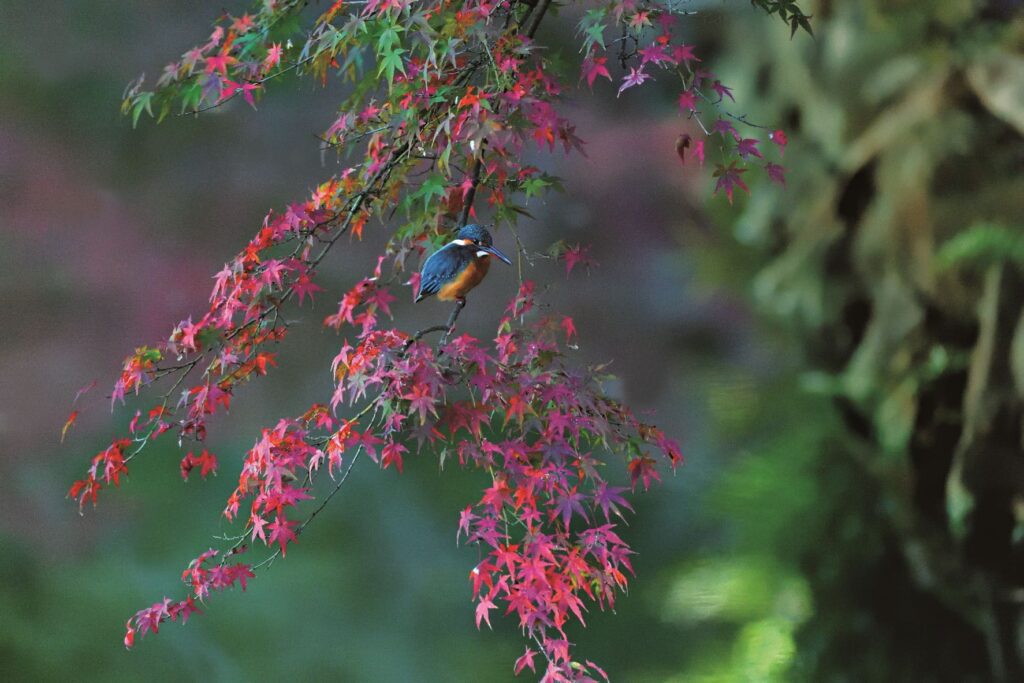 The dashing blue of Common Kingfishers can be seen all year round in Japan, and their recovery across the country in recent years is a promising sign for its freshwater habitats. Discover more about this iconic species and the peculiar history of its Japanese name.

“Through the Lens” Fujingahou Magazine, December, 2022

Common Kingfishers, also known as ‘flying jewels’ in Japan, are resident birds in many parts of the country and are seem all year round. As this is the case, I have realised that I have the chance to photograph Common Kingfishers along with the scenery of the four seasons, so I’ve been paying close attention to the over the last few years. In this article, I would like to introduce you to the Common Kingfisher in late autumn.

The English name for the bird, ‘Kingfisher’, is based on its fantastic ability at catching fish. The first time I heard its Japanese name “Kawa Semi” (Kawa translates to River and Semi to cicada) was when I was in elementary school, and I still remember being surprised at the time. I knew the AbranZemi (a large brown cicada) and Minmin Zemi (another cicada species commonly seen in Japan) were brown and noisy, and I couldn’t find anything in common between them and the quiet, beautiful Common Kingfisher. I was therefore convinced that it was probably because the body shape of Common Kingfishers and Cicadas are similar.

However, when I was researching Common Kingfishers on my computer about 15 years ago, I discovered the origin of the name. “Semi” was not, in fact, from a cicada insect, but from its old name “Soni” (an old word for kingfishers) that was then changed to “Semi“. When you write “Kawa Semi” in the Chinese characters for ‘River’ and ‘Cicada’, it’s said that it just comes from the sound.

The number of Common Kingfishers in Japan decreased significantly during the country’s high-growth period during the 1950’s to 1970’s. This is said to have been caused by a decline in the number of small fish they prey upon throughout rivers due to water pollution, and that nesting sites also became extremely limited due to the paving over of many river banks with cement.

Common Kingfishers are familiar birds in Japan that serve as a good barometer of the health of freshwater ecosystems. Fortunately in Japan, their numbers are gradually recovering across urban rivers. If we have more opportunities to see Common Kingfishers, with their beautiful, brightly-coloured plumage, it means that water quality is improving – and that’s definitely good news for us.

I mentioned that Common Kingfishers are familiar birds, and that’s because I get the impression that they do not seem to care about nearby humans once they get used to the presence of humans. This is why a relatively large number of photographers have succeeded in filming the species’ various behaviours, such as staring at their prey underwater, grooming their wings, feeding on fish and shooting up from the water’s surface. There are some kingfishers in the ponds in the Akasaka Imperial Estate where I live, but unlike parks, it is a place where people rarely come and go, so unfortunately when they feel my presence they tend to disappear in an instant. I am therefore keenly aware that in order to be able to shoot photographs, I need to go to the site frequently and make constant efforts to have them accept my presence as a natural thing.

But in general, Common Kingfishers are more familiar birds than one might imagine. You can see them in parks, shrine ponds and rice paddy paths, so please have a look around for them if you can. Like a blue bird that carries happiness, I feel happy whenever I see a Common Kingfisher.