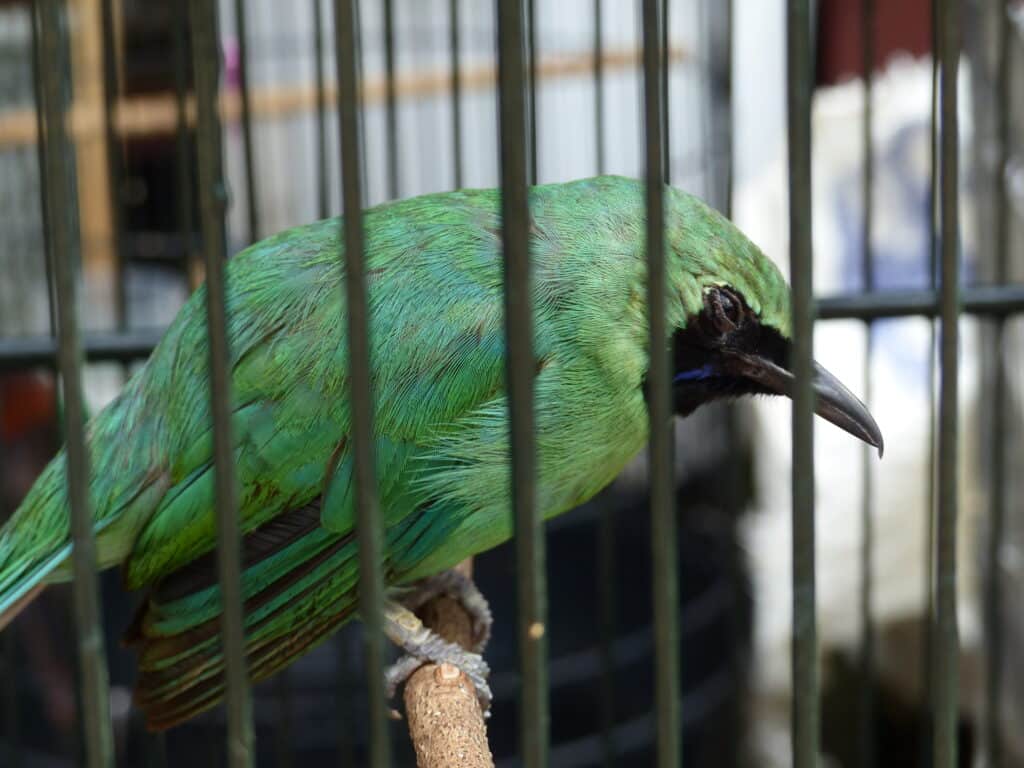 This week, governments will descend on Panama City for another Conference of the Parties (CoP) to an international agreement, this time to take key decisions to make sure the international trade of animals and plants doesn’t threaten their survival. BirdLife will be in attendance to use our extensive knowledge and experience in conservation to help guide these decisions.

A Greater Green Leafbird in a cage © Serene Chng

November is a busy month for international efforts to save the natural world. Taking on the baton from the Ramsar Convention on Wetlands, and as governments continue to negotiate solutions to curb climate change at the United Nations Framework Convention on Climate Change in Egypt, is the 19th Conference of the Parties, known more simply as CoP19, to the Convention on International Trade in Endangered Species of Wild Fauna and Flora (CITES). Here, governments will be making key decisions to ensure sustainability of the international wildlife trade – and BirdLife will be there to help guide these decisions.

What is CITES CoP19?

Now a multi-billion-dollar industry, the wildlife trade impacts an array of species: over a third of the world’s bird species are impacted by international trade, some traded as food, some as pets, while others have unique features highly sought after on international markets.

The trade in wildlife is now a key form of exploitation, which globally is the second greatest driver of extinction risk in birds, with only habitat loss pushing more species closer to the edge. Alongside this, controlling the trade of wild animals is also a vital component of preventing the devastating impacts of pandemics such as COVID-19. However, in some areas trade can be sustainable, and provides an important source of livelihood to rural communities. In these instances, sustainable trade can therefore help incentivise the protection of vital natural habitat.

Why are BirdLife there and what are our priorities?

As the global IUCN Red List authority for birds, BirdLife has recognised the conservation significance of international wildlife trade for many years. We will be sending a delegation to Panama to contribute our wealth of renowned scientific evidence and on-the-ground conservation expertise to help inform governments making decisions at CoP19. For this particular conference, we have several very specific priorities that will help us to push forward our conservation goals.

Every year, thousands of songbirds are traded, many taken from their natural homes to live a life confined in cages. This form of poaching is now a key threat to many species – in Asia, to the extent that is has led to what has been referred to as the ‘songbird crisis’. Despite this, in many parts of the world where large numbers of birds are evidently traded, we only have a limited understanding of its true extent and impact.

Recognising this problem, Parties to CITES are discussing a series of proposed decisions at CoP 19 that will help support the protection of songbird populations. At the heart of CITES efforts to protect particular species or groups is to list them in one of three ‘Appendices’ – each of which comes with different levels and types of regulation of trade.

At CoP 19, proposals from governments to amend the appendices include two Asian songbirds. The first is to move the Critically Endangered Straw-headed Bulbul to the strictest category of protection (Appendix I), banning international trade in all but exceptional circumstances. The second is to begin regulating the international trade of White-rumped Shamas for the first time under CITES by placing it on Appendix II. Although a relatively common species, White-rumped Shamas are traded in vast numbers, so this decision would help conservationists react to what may become an increasing issue, whilst also providing crucial information to understand the extent and impact of this trade.

“Both of these songbird species are heavily sought after and impacted by the international trade to supply cage birds in southeast Asia,” said Anuj Jain, BirdLife’s Bird Trade Coordinator for Asia. “BirdLife supports these listing proposals and will also be making a major push for CITES to improve the currently low representation of songbirds in its Appendices, relative to their high prevalence in trade and the conservation impact this is having and will increasingly cause.”

To elaborate further on our reasons for supporting these listing proposals, BirdLife International and 19 organizations co-signed a letter addressed to the CITES Secretariat and the Parties who will consider the proposals for approval or otherwise at CoP.

2. Turning the tide on vulture use in West Africa

Vultures across Africa have suffered drastic population declines over the last decade and seven of the continent’s 11 vulture species are now threatened with extinction. In West Africa, the demand for vulture parts for belief-based use is the leading driver of these declines – in Guinea Bissau it has been linked to the deaths of over 2,000 Critically Endangered Hooded Vultures in 2020 alone.

The previous CoP in 2019 saw CITES take a significant step by proposing measures to address this significant yet neglected threat, informed by the Convention on Migratory Species Multi-species Action Plan to Conserve African-Eurasian Vultures. Having since worked extensively with local communities and traditional healers to both thoroughly understand and tackle the issue, BirdLife will be helping CITES to update these measures.  “The necessary actions were agreed at a workshop hosted in association with the Nigerian Government just last month,” says Salisha Chandra, Vulture Conservation Coordinator – Africa, BirdLife International. “CITES support will be invaluable in ensuring they can be implemented”.

Alongside these specific measures, BirdLife will as always be amplifying and pushing for ‘nature-positive’ actions, showing how through our Partners we translate the decisions made at these international conventions to tangible, on-the-ground change.  This change is critical if we are to deliver on the global goals for nature, climate, and people. Stay tuned to hear what happens at CITES CoP19!

Unravelling the scope of Illegal Killing, Taking and Trade of Birds (IKB) in Sub-Sahara Africa

Direct killing and taking of birds away from their natural environment can be a major contributor to the decline of some bird species. However, the scope and scale of Illegal Killing, Taking and Trade of Birds (IKB) remains largely unknown in sub-Sahara Africa. As a first step to better understand the threat, BirdLife International conducted a region-wide literature review between September 2020 and May 2021, with an aim of identifying the bird taxa & numbers affected, IKB methods, factors driving IKB and affected countries in sub-Sahara Africa.

Read articleUnravelling the scope of Illegal Killing, Taking and Trade of Birds (IKB) in Sub-Sahara Africa

As part of our effort to curb the devastating damage wreaked by the bird trade, BirdLife has embarked on a study to compile all existing information about bird killing, trapping and trade in Sub-Saharan Africa. We’re inviting you to get in touch with any information that can help us fill in the gaps.