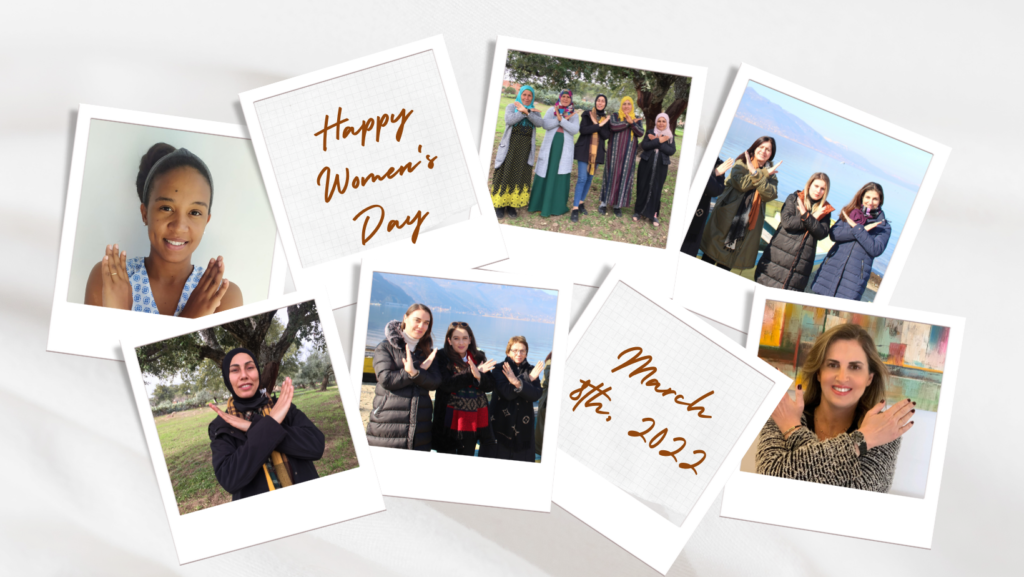 This year’s theme for International Women’s Day is ‘break the bias’, which invites us all to further our actions in achieving women’s equality. Today, we are celebrating motivated and brave women from around the Mediterranean who have chosen to take this path, leading and empowering other women to take their role in the society. These women were supported by BirdLife, through our role as Regional Implementation Team for the Mediterranean Hotspot of the Critical Ecosystem Partnership Fund (CEPF).

Tunisia: empowered women can lift up the whole of society

What started as an environmental project ended up having huge impact on shepherd women and the whole community. These unexpected outcomes were the result of years of hard work to convince men to change their mentality and give their women a voice.

Grazing is widespread in the rural areas around El Feija National Park in the north western of Tunisia. While men were migrating to the larger cities of Gendouba or Tunis looking for better job opportunities, women were left behind and burdened with responsibilities. Shepherd women would go out in groups to graze their sheep in the forests of El Feija, increasing pressure on the forest’s natural resources and causing biodiversity declines due to overgrazing.

To avoid further degradation, local conservation organisation Association Sidi Bouzitoun was given a grant to conserve threatened biodiversity in El Feija National Park by promoting traditional and ancestral grazing practices. However, introducing this new management plan within the park would create conflicts with women herders, so alongside this, the association found alternative income sources to supplement their livelihoods. The project offered women from 30 families training sessions on how to make honey, essential oils and pottery in a quality high enough to compete in the markets. As a result, ten women are now certified with Proof of Professional Competency from the Ministry of Vocational Training and Employment of Tunisia.

The project team also facilitated the sale of these products by providing direct sales points and making cooperation agreements with local shops around the park to promote the women’s products. In addition, they established a small production workshop for women in El Feija, aiming to provide a place to unite women’s efforts and create a brand, T’Zyout, for essential oils.

Shepherd women are often victims of market intermediaries, who take advantage of their difficulty in accessing the markets due to lack of transport. Empowering women within this project gave them the courage to go to the market and sell their products by themselves, thus increasing their incomes and improving the socio-economic situation of the whole community.

The study of plants had stolen Helga Teixeira’s heart from the very beginning, so she decided to delve further into the depths of Cabo Verde’s endemic plants as the subject of her Master’s thesis. Although she is young, she proved herself in this field and became a role model for the younger generation, showing that a woman can be a pioneer.

Endemic plants were not an attractive topic to most of the organisations in Cabo Verde, but Projecto Vito took the lead and was given a grant to conserve the threatened species of the islands of Fogo and Brava. Luckily enough, Helga was just in time to join the team – the only woman to do so.

Seventy-three percent of Fogo’s plants are threatened with extinction – six of which are found nowhere else on earth. Meanwhile, most plants on Brava are threatened, and the island boasts just one endemic species. To gather more information about these plants, various surveys were conducted on steep slopes, in deep valleys and on the walls of roads, resulting in 21 endemic species being recorded.

Helga joined the team on all field visits, unafraid of any risks she may face, and proving that women can make the impossible possible.  At first, friends and family were worried about her – but seeing her determination to fulfil her dream and move forward in her career made them realize that nothing would stop her.

Awareness-raising sessions were conducted in primary and secondary schools in Cabo Verde to showcase the importance of conserving endemic plants as a national treasure. Through these sessions, Helga took the chance to encourage young people, especially girls, to explore this topic. Her stories from the field and her courage to do whatever it takes to gather information about endemic plants has impressed children and created curiosity about this new field.

“I feel that I am sowing small seeds in the hearts of these children, and I hope that it will bear fruit in the future,” Helga says.

Lebanon: nature conservation is the responsibility of all of us

Despite the lack of gender equality in decision-making roles in Lebanon, women have shown a great interest in environmental research, especially in plant conservation. Their achievements in this field have great impacts on science, even beyond Lebanon.

Lara Samaha is well-informed about all of Lebanon’s conservation projects through her position as the Head of Department of Ecosystems in the Lebanese Ministry of the Environment. She has been in direct contact with all CEPF grantees (alongside other environmental NGOs) right from the beginning, joining them in their mission to define the Key Biodiversity Areas of Lebanon.

Unfortunately, the economic crisis is currently hitting Lebanon badly, so the Ministry of the Environment has a limited budget to survey fauna and flora in the country. In these situations, funded projects provide vital support to fill in the gaps and spotlight important species, even leading to the announcement of new protected areas.

This is exactly what happened when Dr. Magda bou Dhager, one of CEPF grantees, reached out the ministry asking for them to establish nature reserves to conserve a rare flower, Iris Sofarana. After revising this nomination, the results showed that the sites did not fit under any protected areas categories. Nevertheless, due to the importance of this species to Lebanon, and since its habitats are in small and scattered areas, a new category for protected areas (‘micro-reserves’) was created and is currently under revision by the minister.

This synergy between researchers and the Lebanese Ministry of Environment showcases the fact that CEPF funding does more than just conserving one species. It can improve the conservation of all of Lebanon’s biodiversity.

Albania: saving the environment will save humanity

Around twenty years ago, a group of Albanian women decided to gather themselves to support abused women in their community. They established an organisation, Une Gruaja (which means ‘I am a Woman’) to empower women and youth in the Pogradec – Korça area by providing psychological and legal support.

After years of hard work for the benefit of their whole society, especially in rural areas, Une Gruaja is recognised as a leader in the region in matters relating to gender equality. Furthermore, women are now well-represented in important meetings at municipality, local and national levels. Tax laws were even modified in favour of women and youth, whereby taxes were reduced for female or young business starters.

This has encouraged more women to seek help and become more aware about their legal rights. Nowadays, the organisation is run by seven women, and more than 100 young people volunteer with them.

Because they are living in a beautiful location – Ohrid-Prespa Transboundary Biosphere Reserve, on the Balkan Peninsula between Albania and North Macedonia – they decided to expand the scope of their work and conserve the environment around them in a mission to further improve their lives.

As spoken word artist Prince Ea says in his poem, Dear Future Generations: “If we don’t all work together to save the environment, we will be equally extinct.”

Taking advantage of their extensive experience in advocacy and community networking, they received funding from CEPF to strengthen the conservation capacities of the regional community between Albania and North Macedonia, sharing best practices and knowledge across the Ohrid-Prespa area. They believe that ideas can speak louder than words, and today, their ideas are indeed having a great impact.

How women are leading nature conservation in Lebanon

History has always shown us that there is nothing more powerful than a group of women determined to achieve a goal. Nowadays, there are women everywhere doing incredible work for the world at large: especially women in conservation, who are harnessing their force to protect nature and our future.