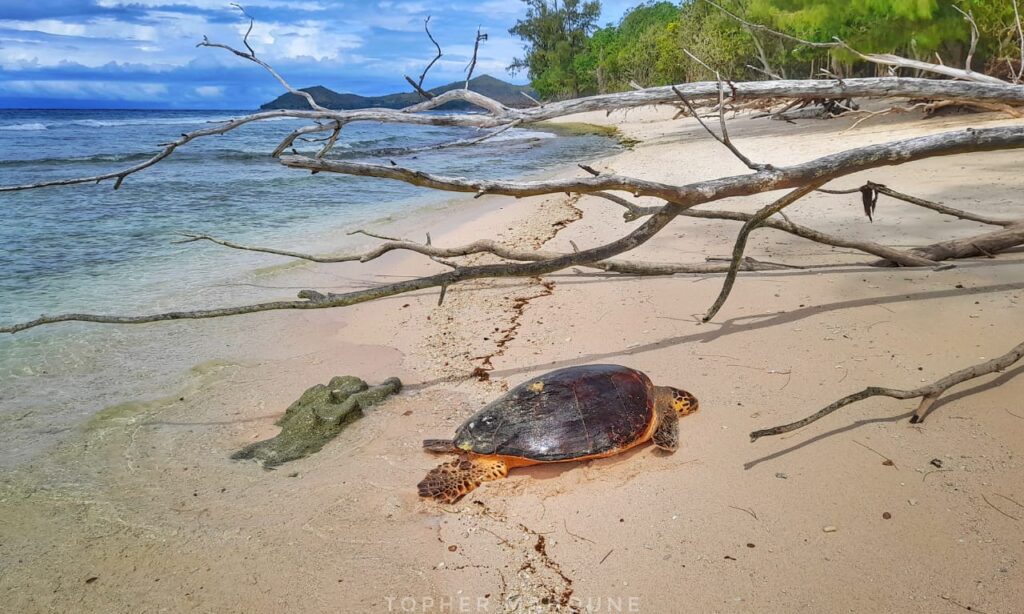 We're excited to announce that the turtle nesting season is well underway on Cousin Island Special Reserve in the Seychelles. This is the busiest time of year for our staff, who are continuing a long-term monitoring project for the species which has been ongoing since 1970.

The sight of the tracks of a Hawksbill turtle Eretmochelys imbricate in late October signalled the onset of nesting. Chris Tagg, our conservation officer on the island, immediately sent a message with photos. “And so it begins,” he said, a tad melodramatically. The nesting season on Cousin Island Special Reserve begins in October and ends in March. However, earlier starts to the season have been recorded in August and September. Similarly, Hawksbill Turtles have been known to nest up to early April.

The Seychelles host one of the world’s five largest nesting populations of this Critically Endangered turtle, and Cousin Island is the most important ‘rookery’ (the term for a nesting colony of sea turtles) in the western Indian Ocean. We expect hundreds of turtles to emerge from the waters around the island to nest, and each turtle will do so two to six times in a season.

The 2019-2020 data shows the importance of this island as a nesting site. The total number of turtles arriving was the highest in the past ten seasons, and the number of nests was the second highest in the last six seasons.

Nature Seychelles staff and volunteers will be on the lookout for them, recording each turtle seen, the type of nesting activity, track and shell measurements, and tag numbers. They will tag all new turtles and record any nests and tracks left behind by the turtles that have not already been spotted. They will also log abandoned egg chambers and body pits, with the reasons for rejection noted for analysis and conservation. These could include roots or rocks encountered by a digging turtle, a cave-in of the chamber, disturbances by human or animals, or a falling tree or branch. Nests will be marked for excavation two months later to determine hatching success.

“Cousin Island is a global conservation success story for the Hawksbill Turtle. Turtles come to these beaches because they are free from human persecution, disturbance, and pollution. The marine area 400 metres from the high watermark is also protected by law,” says Dr. Nirmal Shah, Nature Seychelles Chief Executive.

“Nesting takes place in all of the Seychelles. Although the law prohibits it, turtles are still poached and harmed. Members of the public can help by not taking part in harmful activities towards turtles and reporting any such activities to authorities,” he adds. Other things they can do include not disturbing or distracting a laying turtle, alerting the ministry of the environment or a conservation organisation that is monitoring a nesting beach when they see a turtle, and keeping nesting beaches safe and free of litter.