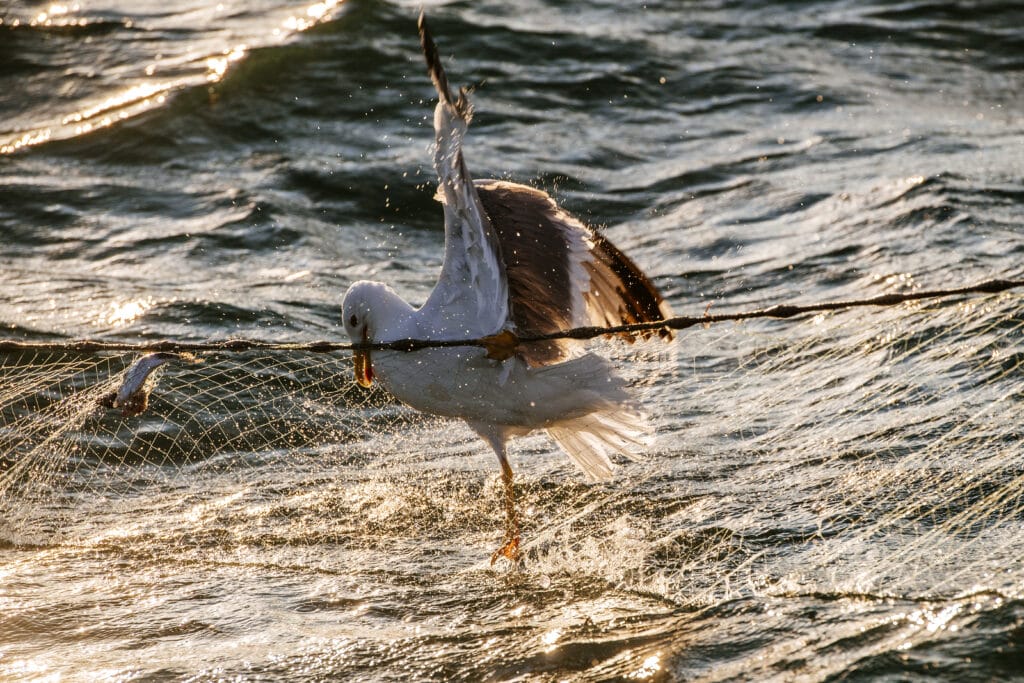 As it shears effortlessly over the warm Mediterranean, a hungry Scopoli’s Shearwater suddenly aims for a single squid at the water’s surface. This excellent diver can usually go as deep as 28 metres underwater, but this time, something is off. Just as the seabird was expecting to savour the soft and juicy cephalopod, it feels a thick, cold metal hook gash through its throat. It turns out the squid was bait on a fishing line.

The shearwater is seriously hurt. It’s panicking. It needs to get out of the water, but the hook has now sunk, and won’t let it leave. To top it all off, sea water is now starting to fill its lungs. It’s too late. This shearwater has become yet another victim of seabird bycatch.

Bycatch occurs when fishing vessels accidentally catch seabirds and other marine life with their lines or nets. It is the single greatest threat that birds face at sea. Globally, seabirds have declined by 70 per cent in the past 50 years, and are currently one of the most threatened groups of birds in the world. They’re even one of the most threatened groups of all vertebrate animals.

In Europe, the picture is particularly grim – far worse than is often appreciated. An estimated 200,000 seabirds are killed by bycatch every year. That’s 23 every hour. More than one every three minutes. That means that every time you brush your teeth, by the time you’re done, bycatch has killed yet another seabird.

As shocking as this figure may be, it doesn’t even tell the whole story. It mainly covers two types of fishing gear, longlines and gillnets, as there is a lack of information on bycatch from other types of fishing equipment. Longline fishing uses a long main line with baited hooks attached at intervals with shorter lines. Most victims of longline bycatch are attracted to the baited hooks when the gear is being set. They get hooked at the surface, and then dragged underwater, where they ultimately drown. Gillnets are large vertical nets that hang from a line floating on the surface and stretch deep into the water with a weighted bottom line. Here too, birds can get trapped underwater in the nets and end up drowning.

Above: A Yellow-legged Gull becomes the unintended victim of a fishing net. Photo © Stipe Surac

200,000 seabirds are killed in Europe through bycatch every year

What’s more, very few fishing boats have observers monitoring bycatch on board, and the enforcement of bycatch monitoring is very poor. In addition, the monitoring only counts seabirds that die. Many are injured and even maimed. Some are caught by fishing gear but escape before reaching the surface, so may go unnoticed. Some are captured alive.

If you’re ever on board a fishing boat and this happens, the first thing to do is to ensure the vessel slows down or stops. Then, the bird should be slowly hauled on board, and immobilised with a towel. The net should then carefully be removed, or the hook or line cut at the level of the mouth. If the bird is in bad condition, it will need to be taken to a wildlife rescue centre. Even if it doesn’t survive, scientists may still be able to gain valuable information from its body.

Bycatch is a very recent phenomenon. Seabirds have always fed in the sea, but in the past, commercial fishing was nowhere near the level of today’s scale and intensity. Some seabirds are particularly vulnerable to bycatch because of the way they evolved. Take albatrosses, for example. Many do not breed before they are 10 years old, and produce no more than a single egg every one or two years. To compensate for this, they evolved into very long-lived creatures, with a low natural adult mortality, one individual even reaching the ripe age of 70.

The issue with these traits is that even small increases in adult mortality can result in population declines: and this is exactly the case with bycatch. Today, 15 of the world’s 22 albatross species are threatened with extinction. What was once an evolutionary advantage is now a risk. This is also the case for some of the closely related shearwaters. You might think that seabirds would evolve and adapt to bycatch, but the problem is that the speed of biological evolution is nowhere near as fast as industrial and technological advancement. The birds simply cannot keep up.

In the Mediterranean basin, certain common fishing practices increase the risk of bycatch: fishing at dawn, when it’s most likely that seabirds will be encountered; widespread longline fishing with baited hooks that attract birds; and the use of floating devices that make the hooks stay longer on the surface of the water.

Many species are at risk in the Mediterranean. Those most affected are Audouin’s Gull, Scopoli’s, Yelkouan, Cory’s and Balearic Shearwaters, European Shag and Northern Gannet. Balearic Shearwater, an endemic breeder in the Mediterranean, is classified as Critically Endangered, and bycatch is a true menace to the species, which is now threatened with extinction within the next 60 years.

The problem is not confined to southern Europe. In the Baltic Sea, the predicament of a range of different species is no less dire. Long-tailed Duck, Red-throated Diver, Common Guillemot, Great Cormorant and Velvet Scoter are all suffering immensely from the bycatch crisis. Every year in the Baltic, 76,000 birds are estimated to be killed by bycatch. And wintering birds have declined by more than 40 per cent in the last 30 years alone.

While seabirds remain its primary victims, bycatch harms many other animals, too. Sea turtles, marine mammals, sharks and rays are killed by bycatch every year in Europe’s waters. In the Mediterranean, a staggering 44,000 sea turtles are estimated to be killed each year.

Another group that bycatch is bad for, perhaps surprisingly, is the fishing community. They want to avoid it: it damages their fishing gear, slows down operations, and they just don’t want to harm wildlife. At BirdLife, we have been interviewing fishing crews from around Europe’s seas to learn about their relationship with nature and how they perceive bycatch. Here’s an extract of an interview from our Fish Tales series with Belhaj Aziz-M’diq, a 42-year-old Moroccan fisherman who works in the Mediterranean:

“Unfortunately, sometimes other animals get caught in our fishing nets. It might take some time, but it’s important for me to put them back in the water, to save them. Why? Because we need to protect marine biodiversity. Otherwise, we will create an imbalance. With climate change and pollution, human activities are already damaging marine life, so we try our best to respect the sea, and nature in general.”

This spirit of wanting to preserve nature’s balance is widely shared among the crew members we interviewed. Bycatch is a scourge. But the good news is that solutions exist.

How to prevent seabird bycatch

There are both practical and political solutions to help prevent bycatch. In particularly dangerous areas, authorities can relieve the pressure on wildlife by spatially restricting fishing operations, either temporarily or permanently. On top of saving seabirds, no-fishing zones would allow fish populations to replenish, which fishing communities desperately need in the long run.

It’s also necessary to end harmful subsidies. Shockingly, 20 billion euros in public money is spent globally every year to support destructive fishing. Some subsidies are even provided to fishing companies and vessels that engage in the degradation of marine habitats or forced labour, practices that must stop. One of the things that makes bycatch so tragic is that it is easy to avoid. Saving seabirds is possible, and it’s something that conservationists and those working in the fishing industry both want. It’s a question of priorities. 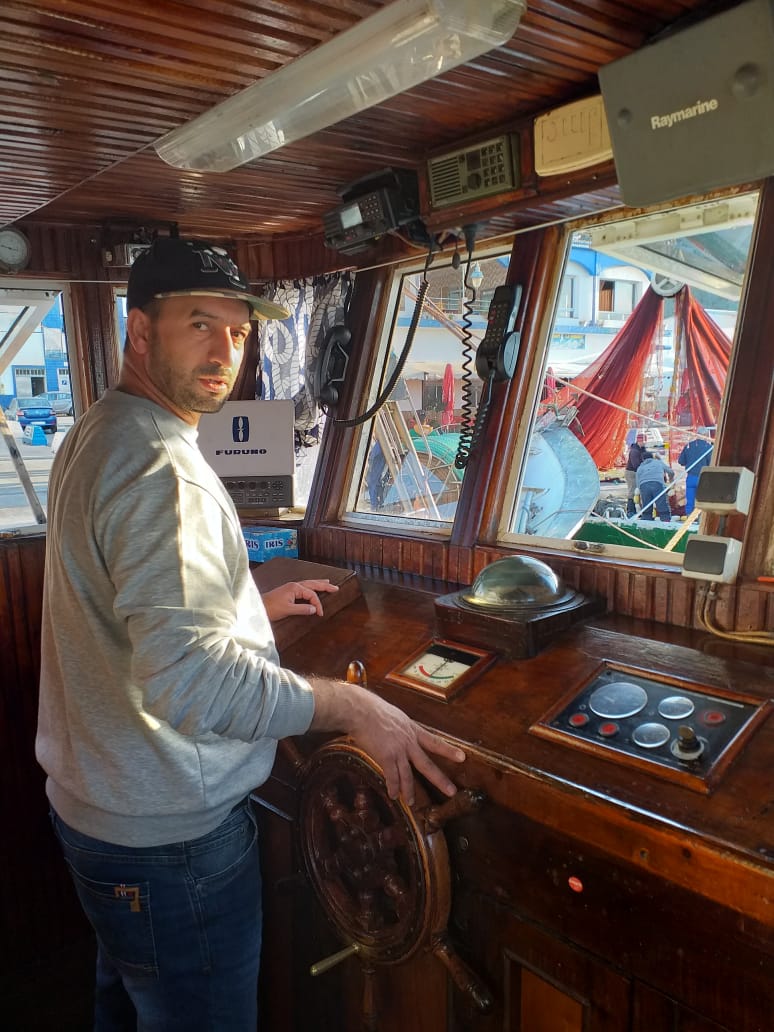 “With climate change and pollution, human activities are already damaging marine life, so we try our best to respect the sea, and nature in general.”

Cameras, kayaks, test tubes, tree saplings, and lawyers: this is how civil society is coming together to save the blue gem of the Balkans