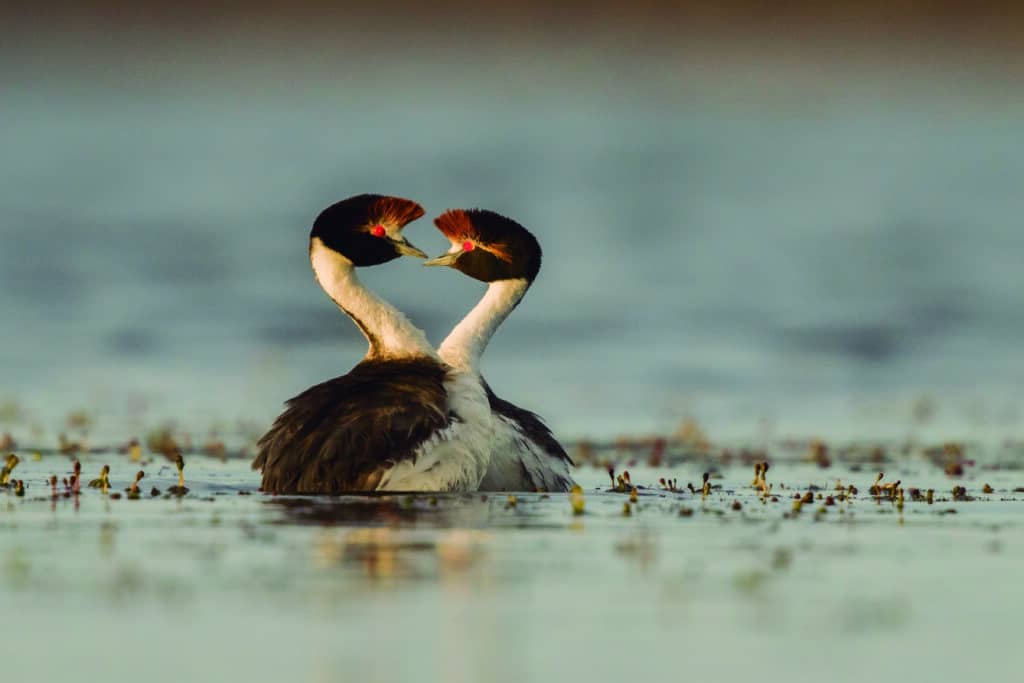 The known history of the Hooded Grebe starts in 1974 when, almost by accident, renowned Argentinian naturalist Mauricio Rumboll discovered it at Los Escarchados Lake in the south-west corner of Santa Cruz Province, Patagonia. Rumboll found the new species to be one of the most colourful and striking grebes in the world, with a spectacular courtship display to rival that of its more famous cousin, Great Crested Grebe. Today, Hooded Grebe has become a symbol for conservation in Patagonia thanks to the hard work of dozens of researchers and conservationists, along with several institutions.

When it was first discovered, numerous studies were launched, and by the end of the 1980s its breeding range was well known and its population estimated to be between 3,000 and 5,000 fertile adults – not bad for a species that, only a few years earlier, had been described as doomed to a ‘natural’ extinction. Based on the knowledge generated during that period, by the beginning of the 1990s it was categorised as Near Threatened on the IUCN Red List. In 1997, an IUCN report concluded: “No major actions need to be taken to protect the Hooded Grebe, as its remote and hostile environment naturally protects it, and there is no risk of humans reaching the area to harm it.”

Sadly, human impact reached farther than expected. During the early 2000s, concerns about the species started to increase. Naturalists and birders had more and more trouble finding it, both at its breeding and wintering sites. In 2003, the first potentially negative factor affecting its habitat was detected: trout production in its breeding lakes at Strobel Plateau. In 2009, local conservation groups Aves Argentinas and Ambiente Sur started to turn their focus towards the grebe. In 2011 they created the Hooded Grebe Project with the support of the National Science and Technology Council, the Neotropical Bird Club and BirdLife International.

Since 2010, the Hooded Grebe Project has been tirelessly monitoring the species, making records of its distribution, population trends and threats. The most shocking result is that the species’ population currently numbers just 750 breeding adults – an 80% plummet since the 1980s. Many questions arise, but the most important one is: what caused such a massive population collapse in only a few decades?

One of the greatest threats is something that affects all of the planet’s biodiversity, along with humanity itself: climate change. Its impacts can be seen in the incredibly fast reduction in the number of lakes available for the grebes to breed in. Aided and abetted by climate change, three invasive species have also arrived in Hooded Grebe habitat, each one directly impacting the grebe at a different point in its life cycle.

By Kini Roesler, Co-ordinator of the Patagonia Programme, Aves Argentinas

80% plummet in Hooded Grebe population since the 1980s

Freshwater fish such as salmon and trout are a major draw for recreational fishers, and generate significant tourism revenue for the local community. This isn’t necessarily a problem, as recreational fishers are mostly on the lookout for large lakes and rivers, where Hooded Grebe does not breed. Unfortunately, due to a combination of bad management and lack of knowledge, these fish have also been stocked into smaller lakes of huge importance to the grebes.

Rainbow trout, the most common intruder, has an enormous impact at the environmental level. This fish changes the entire food chain, eating up freshwater invertebrates that the grebe usually feeds on, and probably affecting water conditions, preventing the growth of Milfoil. This is the only aquatic plant in these lakes, and is an essential material for the Hooded Grebe to build its floating nests.

Although native to Patagonia, Kelp Gull has only recently arrived at the highland plateaus, enabled by debris left behind by human activity, such as animal carcasses, landfill sites and discards from fisheries. This is why it is considered to be ‘neo-native’, or a native invasive species. But while its invasive status is nuanced, its impact is concrete: it preys on colonies during the egg-laying phase, a critical moment in the life cycle of any species. A single gull has been recorded destroying a colony of 30+ nests in less than 45 minutes, devouring dozens of eggs and chicks in a single gluttonous session.

The final, but perhaps most acute, of all threats is American Mink. Mink are an invasive species brought in from North America in the early 20th century for fur production, in an attempt to boost Patagonia’s economic development. This predator can attack grebes at any stage in their life cycle, even as adults. This represents a huge problem, since Hooded Grebe has a ‘live slow, die old’ evolutionary strategy. Adults produce young slowly over a long stretch of years, usually raising just one chick at a time, and sometimes skipping years altogether when conditions are not perfect. As a result, losing a single fertile adult has a devastating impact on future numbers.

To make matters worse, in its natural environment Hooded Grebe’s only predators are birds of prey such as Peregrine Falcon and Cinereous Harrier. It has never before encountered swimming mammal predators, and therefore has no instinct to avoid mink. We have registered several cases in which more than 20 individuals were attacked by just one mink. Our most tragic record is 33 individuals killed in just one night, in an area which is now part of Patagonia National Park.

Since 2012, the Hooded Grebe Project has been taking action to tackle all of these threats. Highlights include controlling American Mink and gulls at key colonies, removing trout from important breeding lakes, and trials with windbreaks and artificial nesting platforms to reduce the impact of strong winds. As an insurance measure, we have also started to implement a captive rearing program to recover eggs that have been abandoned by their parents or left behind after a colony has been destroyed. Hooded Grebe parents tend to lay two eggs, but ignore one of them when the first chick hatches, meaning there is a ready supply of ‘spare’ eggs. Releasing captive-reared fledglings is very much a last resort, but they may be useful for strengthening wild populations once the main threats have been addressed.

Encouragingly, the loss of adults – one of the most worrying factors – has been substantially reduced and we have even managed to increase the colonies’ reproductive success, almost doubling it, thanks to the hard work of ‘Colony Guardians’ – trained technicians who watch over the nests and intervene in the event of mink and gull attacks. This has not only stabilised the overall population, but slightly increased it. However, in conservation, the rule is always to stay alert: for three years from 2018–2020, there were no breeding events whatsoever due to changes in climate conditions, which prevented the blooming of milfoil and blew away any nests that the grebes did attempt to make.

“Our most tragic record is 33 Hooded Grebes killed by American Mink in one night.”

Fortunately, in 2021 the team installed 20 floating platforms at a key breeding lake, Estancia Lago Strobel. These platforms are anchored to the bottom of the lakes to avoid them being carried away by the wind and have been covered with natural milfoil for grebes to build their nests on. Grebes quickly accepted the platforms and started behaving as they would in a natural breeding colony: climbing on to the platforms, courting around them, mating and adding further milfoil to them. All these busy activities give hope that we will soon to see grebes laying and incubating eggs on these artificial platforms.

Elsewhere, the adult population is stable and simply waiting for better weather conditions to raise its young. This makes it even more important to carry on removing invasive species, so that the habitat is as perfect as possible when the birds decide to breed again.

The show must go on

The future of Hooded Grebe is full of new challenges, some of them bigger than ever. A pair of giant hydroelectric dams currently under construction on the Santa Cruz River presents an unknown threat, as their impact on the species and its winter habitat has not yet been discovered. This is why are we are currently analysing potential risks and how they could be tackled.

Nonetheless, conservation efforts certainly seem to be having positive impacts on Hooded Grebe’s populations, so this is no time to give up the fight. Now that we are beginning to make an impact, we need to forge on harder than ever.

But something even more positive has resulted from this project. Even though the species is not yet as famous as the Giant Panda, its image has become well known and today – locally, regionally and internationally – it is a flagship species for the conservation of Patagonia’s biodiversity. In this way, it works as an umbrella species: by protecting Hooded Grebe habitat, we also protect the homes of other threatened or declining species such as Austral Rail (Vulnerable) or Torrent Duck, and even mammals such as Wolffsohn´s Vizcacha – a rabbit-like rodent in the chinchilla family – or Southern River Otter.

Hooded Grebe is also responsible for the creation of Patagonia National Park and the establishment of the Juan Mazar Barnett Biological Station. In this way, this resplendent bird has become the true guardian of Patagonia’s steppes.

Andean Condors are becoming increasingly scarce because of habitat loss, poisoning and persecution. They’re now considered Vulnerable as of the latest Red List update, leading us to ask: has the vulture poisoning crisis spread to the Americas?

Read articleRed List update: the plight of the condor

Grey-breasted Parakeet recovers from three fledglings to a thousand

Read articleGrey-breasted Parakeet recovers from three fledglings to a thousand