Looking out for birds in Brazil – Conservation Leadership Programme 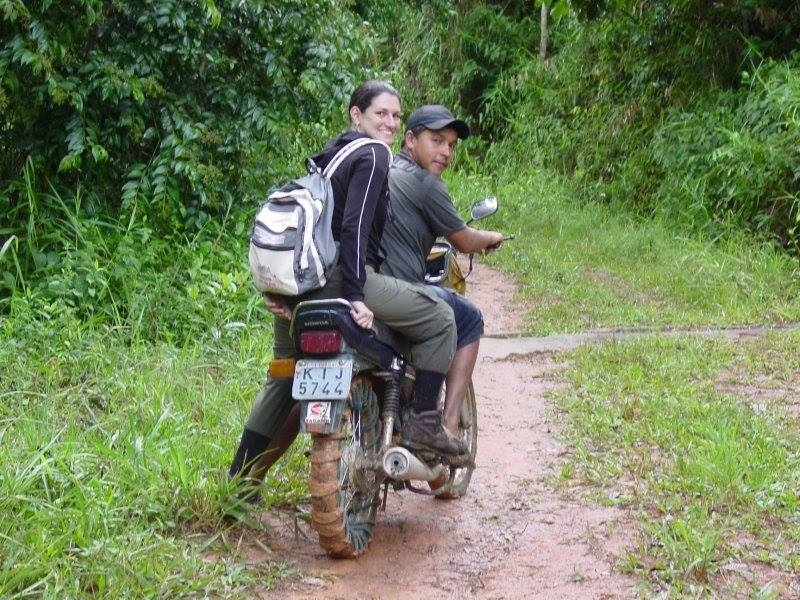 Tatiana Pongiluppi is an expert on Brazilian birds. She runs a birdwatching company in Brazil and leads expeditions for tourists all over the country. Thirteen years ago, Tatiana started out as a volunteer and CLP intern with SAVE Brazil, and went on to lead not just one but two CLP-funded projects focused on conserving biodiversity in a "Forest of Hope" – the Serra do Urubu Important Bird Area. Tatiana has spent her professional life trying to ensure birds can live safely alongside people in Brazilian forests. Below she explains in her own words what’s inspired her all these years and why she’s now turning to ecotourism as a way to achieve her goals.

Tatiana Pongiluppi is an expert on Brazilian birds. She runs a birdwatching company in Brazil and leads expeditions for tourists all over the country. Thirteen years ago, Tatiana started out as a volunteer and CLP intern with SAVE Brazil, and went on to lead not just one but two CLP-funded projects focused on conserving biodiversity in a “Forest of Hope” – the Serra do Urubu Important Bird Area. Tatiana has spent her professional life trying to ensure birds can live safely alongside people in Brazilian forests. Below she explains in her own words what’s inspired her all these years and why she’s now turning to ecotourism as a way to achieve her goals.

What inspired you to pursue a career in conservation?

Since I was a child I’ve always enjoyed nature. As a teenager, I began to more deeply understand the pressures and threats faced by the environment. It was then I decided what I really wanted to do with my life: help people and the environment live in harmony to protect all life forms on Earth. This aim led me to my conservation work.

Why has your conservation work primarily focused on birds?

Birds have always been part of my life. When I was a little kid and refusing to eat my meals, I would be persuaded to eat only if my mum showed me all the rufous-collared sparrows flying around in our garden!

I grew up in São Paulo, which is one of the most biodiverse states in Brazil with patches of Atlantic Forest teeming with birdlife. So when I started university here, I got to know more about birdwatching and this became a real fascination for me. At this point I realized that this would be my way to enchant people about the natural world.

I was inspired to start working to conserve birds when I learned about the alarming situation they face in Brazil. We have the most amazing biodiversity here, but many people are unaware of it and how it affects their lives. At worst, they don’t care about it and some people even choose to destroy it.

What kind of conservation projects have you worked on in the past?

After I finished my undergraduate studies in 2007, I started volunteering for SAVE Brazil (Birdlife International in Brazil). This involved travelling to various parts of the country to educate local communities about bird conservation, as well as conducting bird surveys.

During this time, my ears became so well-attuned to bird calls that I can now identify around 700 bird species in Brazil based on their songs alone – this is very useful when you’re in deep forest with no hope of seeing them!

It wasn’t long after I started volunteering for SAVE Brazil that I was granted a funded internship by CLP to support my work. Two years later, my team received one of CLP’s Future Conservationist Awards to set up an Education Centre for the conservation of birds in the Serra do Urubu Important Bird Area, which we opened in October 2009.

But we weren’t quite finished! In 2014, we received one of CLP’s Follow-Up Awards to engage other stakeholders in conserving the Serra do Urubu Important Bird Area. For this project, we worked to promote Serra do Urubu through ecotourism, birdwatching, and building local community awareness.

Is there a particularly vivid memory that has stayed with you through the years?

It was during my work with SAVE Brazil, when I was educating teenagers about a threatened bird species. I had weekly meetings with these schoolchildren in a small rural village for an entire year. For our last meeting, I had asked them to present a plan about how they would raise awareness about the birds in their village. And what a surprise I had!

When I arrived at the school, there were a lot of people milling around, including students but also some community members, which I initially thought was a bit strange. Then I saw a big stage decorated with birds and forests, and when the students started to present on the stage, it soon became clear that it was really a theatrical show!

The show was very well planned with a really good script talking about threats, conservation, and community engagement. But what really made me cry was the finale: a band arrived on the stage and started to play a rock song about the bird and its conservation, which the students had composed themselves. After this first show, they presented this piece in many other local schools and in the main square of the city.

What are you proud of achieving during your work with SAVE Brazil?

When I was an intern, one of the biggest challenges we had was to establish a good relationship with the mayor and the government agencies in the nearby city, Lagoa dos Gatos. Initially, we were seen as a threat by some people who were not keen on having a relationship with us. However, after our first CLP project, the locals started to see us in a good way and we were able to set up partnerships with many sectors in the city. This included the Tourism Agency, which started to promote SAVE Brazil’s Private Reserve (RPPN Pedra D’Anta) as one of the city’s main destinations and attractions. As a result, during our second CLP project, there was an influx of visitors from the surrounding areas, which meant we could tell many more people about the importance of the natural resources in the region.

How did the support you received from CLP make a difference to your life?

CLP has helped me a lot in my development as a conservationist. The most remarkable way it helped me was to improve my knowledge and empower me, which gave me the confidence I needed to act.

After my team received the Future Conservationist Award in 2009, I attended the CLP-funded Conservation Management & Leadership course in China. This was a life-changing experience and I really wish every young biologist could have this incredible opportunity. Beyond all the knowledge and skills that I learned there, meeting the CLP management team, the trainers and other participants gave me a wider view of the conservation world and inspired me to use different tools and creative ways to deal with our conservation problems here in Brazil. All the skills that I developed during the course, such as leadership, mentoring, self-confidence, strategic thinking and communication, are still helping me today in my daily life.

Are you still working in conservation? What are your plans for the future?

A few years ago, I decided to start working as a birdwatching guide in the tourism sector. I saw it as a way to keep working with birds, people, and nature, and link conservation with economic development and social justice in local communities. So, together with my husband, Caio Brito, and a great friend, Ciro Albano (who is also a CLP alum), we set up a birdwatching company. We organise and lead birdwatching expeditions around Brazil to try to find those truly special moments where we can charm people with the sights and sounds of the rarest and most beautiful Brazilian birds.

In the future, I want to continue developing our company and find ways to make a difference to conservation in the areas where we work. In my personal life, I’m currently expecting my first child, so my immediate plan is to raise our baby in a natural and healthy environment.

What advice would you give to conservationists starting out in their career?

If you have a dream and really believe in something, go towards it and don’t let anything or anyone destroy your perseverance. Work hard and look for the many opportunities that are available, and don’t give up on what you really want.