The journey of Bird Island’s “modern wandering albatross” moves into its next phase! If you have been following #AlbatrossStories, you may remember one of our recent blogs where we pondered “What is it like being a modern wandering albatross?” - this is referring to our very own albatross star family, Sitka, Ernest and their charming chick Nova. Sitka has taken part in a Darwin Plus project, led by BirdLife International and the British Antarctic Survey (BAS), to understand what wandering albatross do when they head out into the high-seas to forage and crucially, how they interact with fishing vessels.

Alexandra Dodds, Albatross Zoological Field Assistant for BAS on the island, has been attaching and retrieving the radar data loggers on 30 individuals. Alex explains the study here:

The project aims to “link areas where wandering albatross are frequently visiting and detections of vessels from ‘on-bird’ radars to understand the interactions of tracked wandering albatrosses with legal and Illegal, Unreported and Unregulated (IUU) fishing vessels (BAS Research Project).  Besides studying breeding adults during chick rearing, the project is also investigating where adults, taking a year off from breeding, and young adults go to find food.” 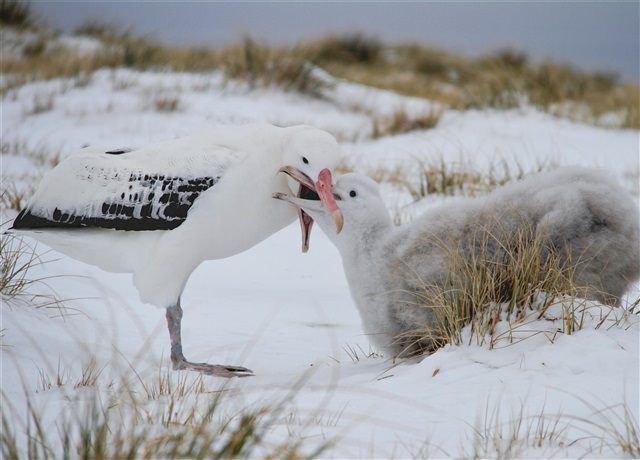 Why do we need to know more about how albatross interact with fishing vessels? Albatrosses are foragers, particularly opportunistic foragers, meaning they scan the oceans for any hint of food (using their acute sense of smell), and follow signs which indicate a bountiful patch of ocean for their dinner. Fishing vessels look like an all-you-can-eat buffet to an albatross, and not one to be missed! Unfortunately, this is where the biggest threat facing almost all 22 albatross species across the oceans begins. Long-line fishing boats deploy thousands of baited hooks which are far too tempting for any albatross, when a bird grabs the bait the can also be impaled by the hook, and dragged under the water, this is called incidental mortality - or bycatch! Along with deaths from trawling, a method involving pulling a large net behind the vessel which often entangles seabirds, it is thought that ~100,000 albatross are killed in bycatch incidents every year. Projects like this one are generating further knowledge in where these incidents are most likely to occur and helps to understand the extent of IUU fishing vessels.

“During the Southern Hemisphere winter months of July and August the wandering albatross parents go on foraging trips of around 9 days to gather food for their ever growing chicks.  These months are also when fishing activities peak both in national waters and the High Seas areas used by the birds.  This winter on Bird Island, 30 devices consisting of; a GPS-radar, an accelerometer (used to determine activity and behaviours) and an immersion logger (to determine when the birds are on the water, suggesting feeding), have been deployed on breeding adults.  Trip duration ranges from a few days to a few weeks, but two tagged birds took a whole month to gather food for their chicks!  Different areas of ocean have been used by different individuals, with some not straying far from South Georgia, while others travelled as far as the Brazilian coast - 3000km away!  The tracking project is providing unprecedented detail not only on the foraging areas of each individual, but where and for how long they interact with fishing vessels.  We can even tell the names of many of the vessels by comparing their movements (using satellite-AIS signal monitoring by Global Fishing Watch with the radar detections provided by the birds.” 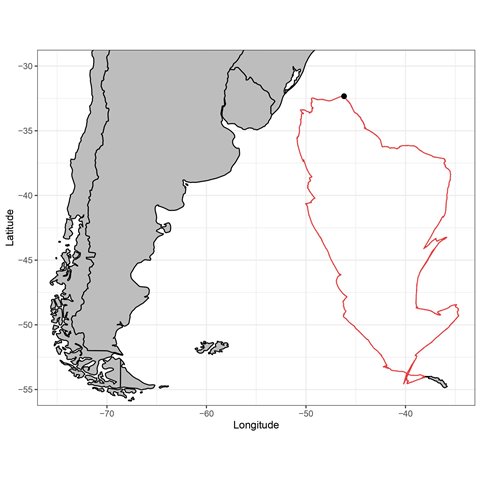 CAPTION: This image shows the journey of Sitka, our #AlbatrossStories super-mum, who flew all the way to the Brazilian coast in order to find food for Nova. She flew a round trip of around 10,500km in 16 days!

Albatrosses are some of the oldest living wild birds in the world; a northern royal albatross, in New Zealand’s Taiaroa colony nicknamed ‘Grandma’, was believed to reach the grand old age of 62, and currently on Midway Atoll, in the North Western Hawaiian Islands, there is a laysan albatross named ‘Wisdom’ who is around 68 (and still breeding!). Throughout these long life spans, 90% of their time is spent at sea, the time spent on land is minimal and only for breeding and raising their chick. With the satellite loggers now retrieved, the team can begin to analyse the data allowing us to gain further insight into the wandering albatrosses, life at sea.

If you want to support the work of the Albatross Task Force you can become a friend of the albatross, helping projects such as educating fishers on the importance of bird scaring lines which deter Sitka and many others from the dangers of fish hooks.

Worldwide A YEAR IN THE LIFE OF AN ALBATROSS

Today we celebrate International Day of Women and Girls in Science. In recognition of the critical role women play in the advancement of knowledge, we would like to broadcast some of BirdLife’s most amazing and...
Read more
Worldwide

How we're helping the Helmeted Hornbill to nest in safety again

Teetering on the edge of extinction due to demand for its prized 'casque', the Helmeted Hornbill now finds itself with a fighting chance of survival thanks to bolstered law enforcement and patrols of its dwindling...
Read more
WorldwideBruneiIndonesiaMalaysiaThailand

Controversial plans to mine for bauxite in Ghana’s Atewa Forest – a Key Biodiversity Area – have received opposition from three global manufacturing companies who would have been major customers. This new development...
Read more
WorldwideGhana

With a touch of comedy, India-based cartoonist Rohan Chakravarty uses his illustrations to give a view of the world through a bird’s eyes and present thought-provoking conservation messages. Explore the fascinating...
Read more
WorldwideBurmaIndonesiaMalaysiaThailand

Intensive agriculture is fuelling the biodiversity and climate crisis. And European farming has significant worldwide impacts.

That's why we are sending an open letter to European Commission President Ursula von der...

Shot down but saved: the inspiring story of Anahita the Egyptian vulture

A young Egyptian Vulture’s first migration was brutally cut short. Thankfully, BirdLife Partners were watching over her every step of the way. Through their co-operation, they transformed an illegal hunting casualty...
Read more
WorldwideBulgariaLebanonTurkey

The carol “The Twelve Days of Christmas” may soon need to become one verse shorter as a European partridge is listed as Near Threatened. Meanwhile, paradise is restored for one flycatcher, proving that conservation can...
Read more
WorldwideBhutanChinaIndiaNew ZealandPapua New GuineaPeruSeychellesSpain

Why birds are the answer to saving Malaysian forests

Often dressed in bright colours and with absurdly bulky bills, hornbills are remarkable-looking birds. But their value goes far beyond their aesthetics: they have become the key to saving some of Malaysia’s most...
Read more
WorldwideMalaysia
‹ ›