Bird Island is the place to be! As always, it is go go go down on South Georgia – although it is particularly the case at this time of year. Home to four out of the world’s 22 albatross species, there is always something going on due to their extensive and varied breeding cycles!

The grey-headed chicks have now hatched and parents are hurriedly searching for food in the expanse of the Southern Ocean. The wanderers are taking their time not wanting to rush into anything: they have been taking it in turns incubating their precious egg since December, their only egg for the next two years. The elusive light-mantled albatrosses also have their chicks now, although they’re keeping themselves to themselves hidden on the cliffs of the island. 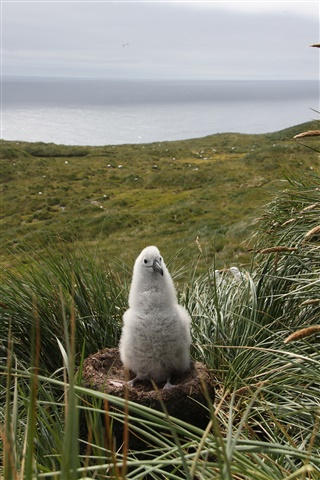 If you have been following along with #AlbatrossStories, you will have seen that our black browed albatrosses are well into parenting mode! So, with no further ado, we are introducing… Snowball: the beloved chick of Eirwen and Haru, our black browed star couple for this season. A massive thank you to Scawby Academy for your amazing suggestion and video!

Black browed albatross often dominate the breeding scene on Bird Island with their confident and loud personalities! But their antagonistic and aggressive personalities are put aside when it comes to romance and their care and devotion to raising their chick shines through. Eirwen and Haru’s little chick appears to be doing well! Snowball is looking healthy and growing by the day, aiming to put on as much weight as possible to grow its much-needed flight feathers. Our new star hatched on the 2nd January, starting Eriwen and Haru’s year off with a bang. Black browed albatross are dedicated and sometimes strict parents and it won’t be long until Snowball is taking to the skies.

This is the couple’s first chick together as they are relatively new to one another! Albatross are generally monogamous meaning they mate for life – but when that life sometimes gets in the way (failed eggs, a partner not making it back to the island, or things simply not working out) they will re-marry! Haru was born in 1993 and has had many breeding attempts with various ladies. Eirwen is new to all of this, and is relying on instinct and Haru’s experience to raise little Snowball. That said, she is doing incredibly well already: having a successful egg on the first attempt is not something many black browed albatross can boast.

With Eirwen meaning ‘white blessed’ in Welsh and Haru meaning ‘to soar’ in Japanese, Snowball represents a even more than new life on Bird Island. It links together the amazing #AlbatrossStories campaign, which aims to raise the profile of these impressive and vulnerable group of seabirds by working from the UK and Japan (check out AlbatrossStories_JP). We like to think that Eirwen and Haru’s relationship represents the ‘marriage’ of these two countries in finding a solution to albatross decline! A lot resting on Snowball’s feathery shoulders, but we’ll keep that to ourselves until our chick is ready. 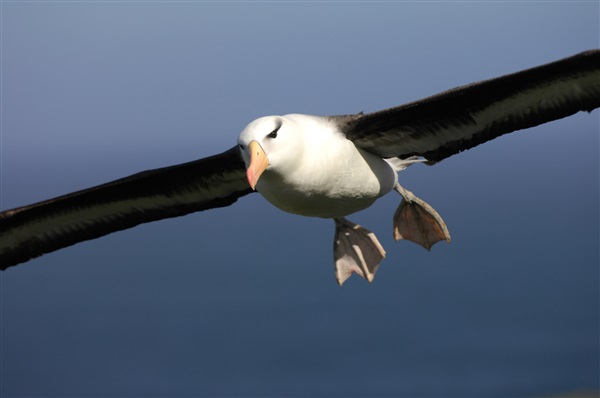 We of course can’t talk about Snowball without mentioning Sora and Umi, our first couple who tragically lost their chick this season when it was left alone for the first time. This is not an uncommon fate for many ‘mollymawks’ due to being slightly smaller albatross than the ‘greats’ (wandering and royal albatross), their chicks are prime prey for other families living on the island.

As with our albatross, many species are trying to raise chicks of their own; Sora and Umi’s chick was taken by a skua, a predatory seabird, who was trying to find food for its chick. This is a natural and important part of life, particularly when living on an isolated, exposed island.

It is down to us to help mitigate the effects of threats beyond these species’ control. The Albatross Task Force team are working tirelessly across the globe with fisheries to reduce the numbers of albatross drowned on fishing lines and killed by trawlers, a significant threat to almost all 22 albatross species.

To follow the stories of all of our Bird Island albatross find us on Facebook, Twitter and Instagram. If you want to support the dedicated Albatross Task Force team, you can become a friend of the albatross here.

On behalf of the Critical Ecosystem Partnership Fund, BirdLife announces a new large grant Call for Letters of Inquiry for projects focused on the protection of coastal areas in Cabo Verde.
Read more
WorldwideCape Verde

Making timber and crop production sustainable would address some of the biggest drivers of wildlife decline. This finding comes from a new tool, STAR, that allows companies, governments and civil society to accurately...
Read more
WorldwideIndonesia

As global temperature rises, species will be driven across national borders to find suitable habitat. Physical barriers like the USA-Mexico wall and fences between Russia and China aren’t the only complication. BirdLife...
Read more
Worldwide

Social justice and nature conservation: part of the same mission?

Kevin Hague, CEO of Forest & Bird (BirdLife in New Zealand), explains how his experiences campaigning for racial equality and gay rights fit into his current mission to protect the stunning nature and birds of New...
Read more
WorldwideNew Zealand

Global Bird Weekend: how you can help birds by spotting them

Saturday 17th – Sunday 18th October is Global Bird Weekend, where people across the world will venture out to record as many birds as they can – and raise money for conservation while they’re doing it. Here’s why you...
Read more
Worldwide

Join us for a bite-sized round-up of advances published in our journal Bird Conservation International. Highlights include the complexities of reintroducing hornbills to the wild, the truly devastating scale of European...
Read more
WorldwideChina

Since 2014, larger-than-life paintings of more than one hundred bird species threatened by climate change have been wowing residents and spreading awareness in Harlem, New York. The project is set to cross the Atlantic...
Read more
WorldwideUnited States of America

As birds migrate from Europe to their wintering grounds in Africa, we explore the fascinating behaviour of the Common Ringed Plover, a small but feisty wader familiar across Africa’s wetlands.
Read more
Worldwide
‹ ›