Bird Island. An exposed, raw, isolated island in South Georgia. Although only under 5km in length and reaching 800m at its widest point, this island gets its name for a reason. Bird Island is home to four of the world’s 22 albatross species so you can see why this tiny area of land is a hot spot for scientific research. Similarly, the nickname of ‘Ocean Wanderers’ describes albatrosses perfectly. They spend  up to 90% of their life out at sea, and some reach 65 or more years of age; you can see why land based monitoring can only get you so far when trying to understand and mitigate their decline.

The grey-headed albatross is one of the mid-sized albatrosses although with a wingspan of over two meters. Like all albatrosses, their long, narrow wings are expertly suited for gliding, making soaring over the 40ft waves of the South Pacific high seas look like our Saturday morning walk to the coffee shop. Their elegant black and yellow bill, and a gentle white highlight beneath the eye infers a placid disposition. However, their commitment to parental care, raising just one chick every two years, and the lengths to which they will go in order to find enough food to get this chick through its first five months, is in stark contrast to their tranquil appearance. Once their chick has fledged, the parents can “relax”. The pair will spend the next 16 months apart, navigating the southern oceans alone. Nonbreeding adults have been tracked previously using geolocators; these are tiny loggers which record light levels, which are used to determine sunset and sunrise times, and hence latitude and longitude. These show that although adults mainly use remote feeding grounds, they also come closer to land on the Patagonian Shelf off Argentina, and where the cold Humboldt Current meets the Chilean Coast, both regions renowned for their rich wildlife.

“The life of the juveniles, is poorly known. Post-fledging there is no parental guidance. The naïve youngsters have to negotiate these wild waters having never flown before; they must find food for the first time and, importantly, avoid potential predators such as giant petrels, relying on whatever they can find in their internal library (otherwise known as DNA). This, unfortunately, may lead them into trouble. With 700,000 seabirds - many of them albatrosses - caught incidentally on fishing lines or injured in collisions with trawl-net cables, it is critical that we understand where grey-headed juveniles venture in their first few months and years at sea.”

The IUCN have recently ‘uplisted’ the status of the grey-headed albatross from Vulnerable to Endangered, and over the past decade, the species has declined by 5% a year. For an animal that can only raise one chick every two years, that is a significant and worrying decline. Recent analyses have indicated that the survival rate of juvenile grey-heads is lower than expected, but we know little about their distribution or behaviour at sea. 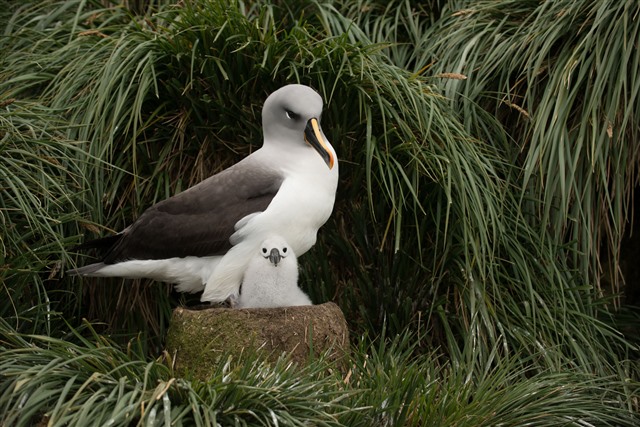 In collaboration with RSPB and BirdLife International, the British Antarctic Survey (BAS) are bridging this gap in knowledge, by investigating their movements during this early stage. Professor Richard Phillips (BAS) commented

“Tracking individual grey-headed albatross fledglings using satellites has revealed a wealth of new, and fine-scale information on their distribution, and how different it is from that of adult birds. By mapping this in relation to seasonal changes in the locations of fishing vessels, we can greatly improve our understanding of this threat, and help mitigate the further loss of these magnificent birds”.

You can see the satelite tag (PTTs) results of the grey-headed albatross juveniles from Bird Island, South Georgia, here: https://www.bas.ac.uk/project/grey-headed-albatross-juvenile-tracking/

Observers on fishing vessels report immature grey-heads caught in longline fisheries in areas rarely used by adult birds. Predatory giant petrels also pose a big threat, particularly around the time the young birds leave the colony. BAS have attached satellite tags to a total of 32 chicks prior to fledging in May 2018 and 2019. Tagging is essential to understand their movements; with over a million years of ancestry, albatrosses are masters of effortless flight and can travel hundreds of kilometres every day, so you can understand how following them by any other means can be tricky! Initial analysis of the 2018 tracking data by Frankish et al, have found juvenile grey-heads initially heading north-east across the central South Atlantic. Matching this with fishing data shows an apparent overlap with Japanese longline fishing fleets in the southeast Atlantic. This hotspot corroborates captures of grey-headed albatrosses reported by fisheries observers in what appears to be an area of high bycatch risk. Later in the year, many juveniles head further east, some past South Africa and across the Indian Ocean towards the Pacific (one recently reached Australia and New Zealand after travelling 39,000 km since May!), encountering numerous other challenges along the way. 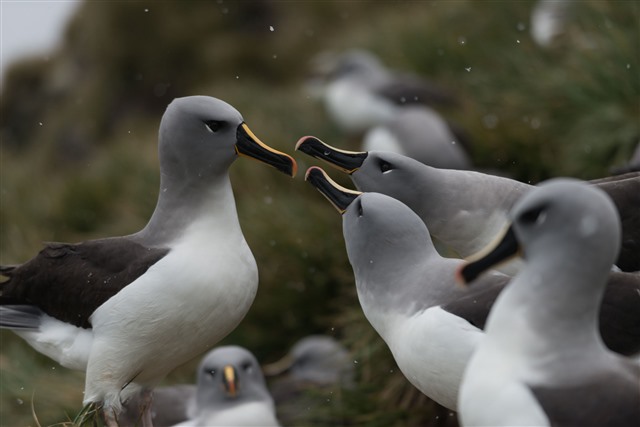 If you have been keeping up with our Albatross Stories campaign, you may remember our charismatic young grey-headed albatross, Bobby, the chick of Skylander! We were able to follow his journey from egg to first flight, Bobby was even involved in the BAS tracking study; he and 15 grey-headed ‘colony-mates’ were fitted with satellite tags. Albatross Stories have been following along ever since, with some of the trackers still sending signals, providing us with a window into their adventures, updates of which can be seen on the Albatross Stories Instagram page. Follow along to witness the new season kick into gear, as adults return to colonies fresh from their winter travels ready for the long breeding-season ahead.

This is an exciting, yet critical time of discovery. This tracking study of juvenile grey-headed albatrosses is shining critical new light on unknown bycatch hotspots and helping direct mitigation efforts. With our teams working across the globe to reduce seabird bycatch, and some fantastic success stories already emerging, this could be one of the missing puzzle pieces to help us understand grey-headed albatross decline. The South Atlantic between latitudes 30°S and 60°S is a highway for circumnavigating seabirds of many species. Discovering threats posed for the grey-headed albatross, can help us protect other graceful giants of the high seas.

Funding for this project was kindly provided by the David and Lucile Packard Foundation, the South Georgia Heritage Trust, and the Friends of South Georgia Island.

Photos by Derren Fox with thanks.

Introducing Hatch: boosting conservation from the ground up

We’re excited to launch Hatch, a new initiative from the BirdLife Partnership that supports the growth and performance of environmental civil society organisations around the world.
Read more
Worldwide

Join us for a bite-sized round-up of advances published in our journal Bird Conservation International. Highlights include a species that’s learning to live alongside humans, the positive impacts of protected areas, and...
Read more
WorldwideBotswanaChileEcuadorPeru

How your decisions can impact tropical forest landscapes

Our new animation, launched at the Global Landscapes Forum, turns to an unlikely inspiration to help explain landscape conservation and our innovative work to support communities in tropical forests: videogames.
Read more
WorldwideBrazilCambodiaIndonesiaParaguay

Latest research: how does human disturbance affect the lives of birds?

Join us for a bite-sized round-up of advances published in our journal Bird Conservation International. Highlights include insights into how human disturbance affects the feeding, breeding and overall health of bird...
Read more
WorldwideCambodiaSpainThailand

New research station protects Madagascar forest from the inside out

Geographical isolation and rugged terrain have given rise to astounding wildlife within Madagascar’s Tsitongambarika Forest, but have also made it difficult to reach and protect – until recently. Introducing Ampasy...
Read more
WorldwideMadagascar

2020 has been a year like no other. Spring Alive, our children’s education programme, had to make a lot of changes – but thanks to the hard work and ingenuity of our Partners, teachers and volunteers, we’ve still...
Read more
WorldwideArmeniaCroatiaCyprusMauritaniaNigeriaSouth Africa

The latest member of the BirdLife family becomes our second partner in the United States; brings Partnership total to 116
Read more
WorldwideUnited States of AmericaUzbekistan

Today we celebrate International Day of Women and Girls in Science. In recognition of the critical role women play in the advancement of knowledge, we would like to broadcast some of BirdLife’s most amazing and...
Read more
Worldwide
‹ ›